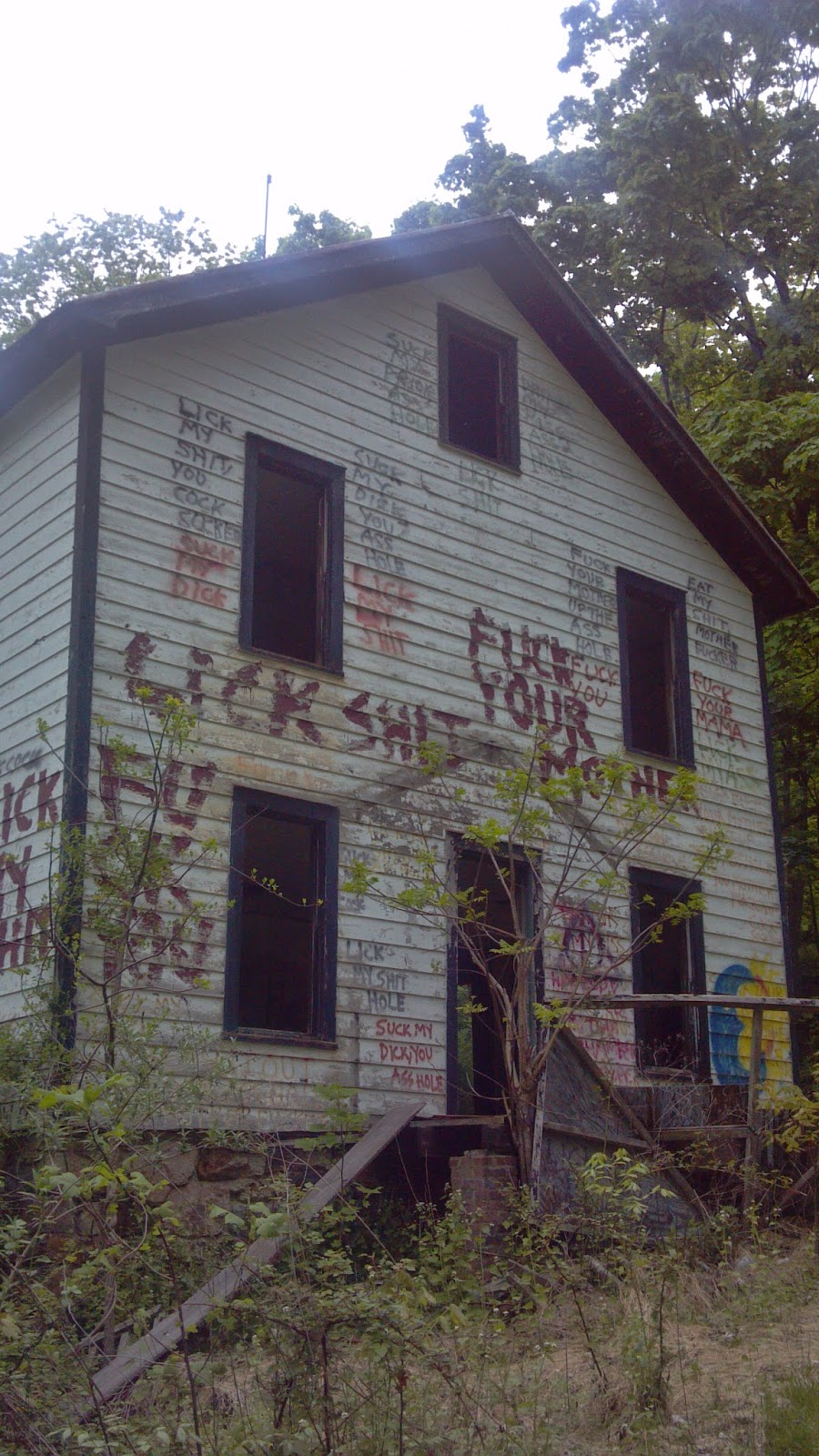 The area is called Tranquility along the County Road 517 and consists of rolling farmland and rural countryside. You would never know that this fantastic rustic abandoned location existed unless you knew where you were going. Even an overhead search of Google Maps hides this beauty all too well. The road to this location strolls past a bar and looks like a dirt road leading to nowhere, but if you decide to follow it you will see it runs past 2 occupied houses and alongside a heavily tread mountain. You will come to a once impressive ten foot concrete pillar with heavily rusted iron gates. This was the grand entrance to the Rutherurd-Stuyvesants Estate. This road, which was once the driveway to one of the most impressive estates in New Jersey and arguable the whole United States, is called Stuyvesant Road. The Stuyvesant's are one of the oldest and wealthiest families in the United States. The Rutherurd-Stuyvesants were direct descendants of Peter Stuyvesant (1592-1672), who was the last Dutch colonial Director-General of New Netherland, the Dutch territory between the Delaware Bay and the Connecticut River (including what is now New Jersey) until it was ceded provisionally to the English in 1664. 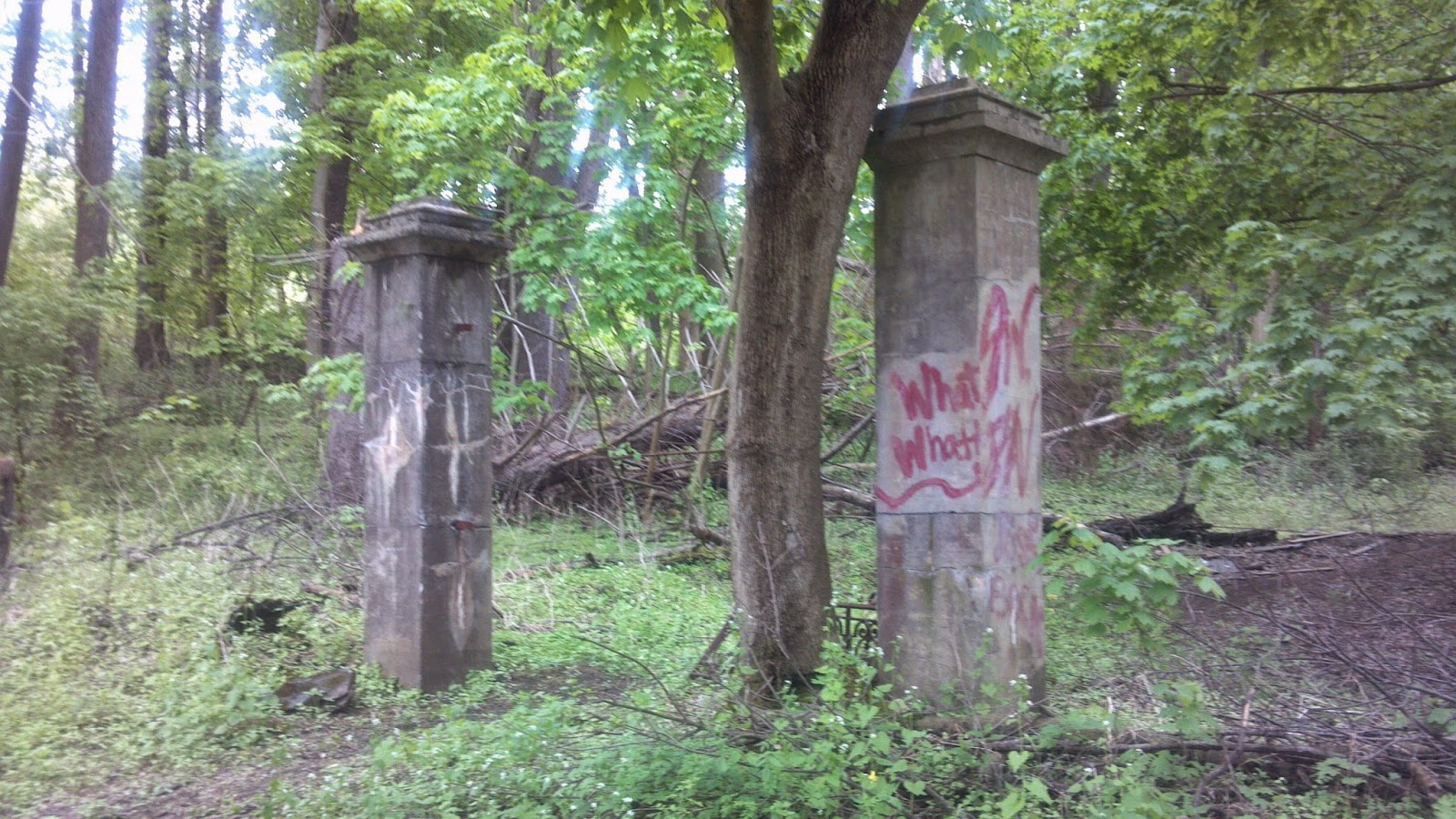 If you decide to continue past the gates you will see a wooded carriage path and the remains of structures that were built in the late 1700's, featuring walls, bridges and dams. If you venture even further you will come to one of the oddest of locations that we have visited. There are 6 buildings still standing but are in very severe disrepair, these include farmhouses, barns, mills and what not, on our 2nd trip here there was a little boat added to the mix. Now onto the most strangest of the strange..on EVERY square inch of this property, every board, door, window, cabinet, there is vulgar profanities Spray painted onto it. To the average person this may be disturbing, but to us, we can find the extreme beauty in decay. There also is a train station a few miles away that suffered the same treatment as this location but we have not visited there yet. No one has claimed this work but the majority of it appears to have come from the same person since the paint and the writing is very similar. Obviously other visitors have added their print to this masterpiece. Some of the slanders are directed at someone named Mark and his mother, I can only imagine the anger seething in the person that wrote all of this towards another human being. The dedication is top notch based on how the artist painted so much in all these buildings. 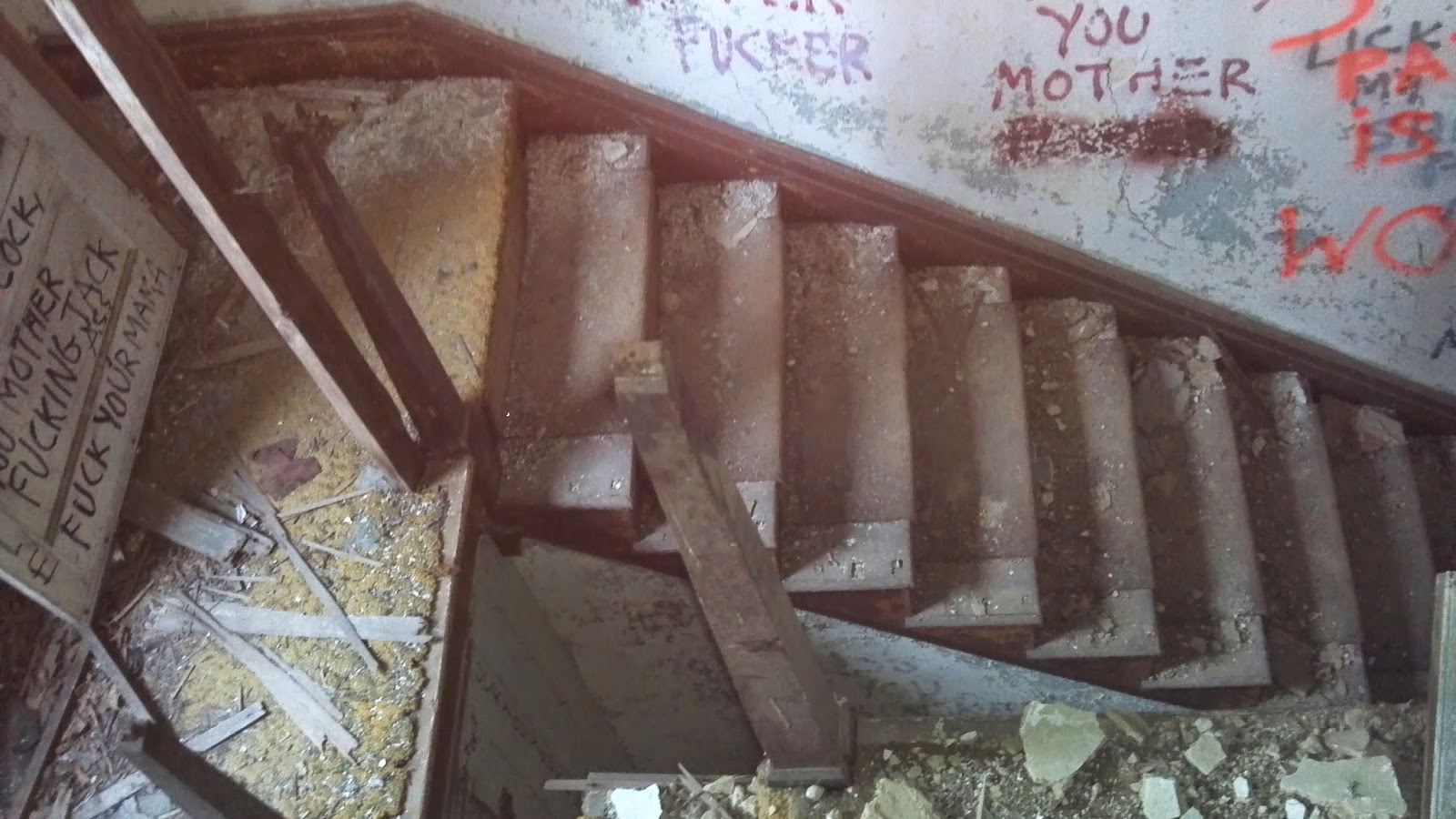 Visit #2:
This group of buildings was probably my favorite location of all the places that we visited. It is a collection of 7 houses in various stages of decay due to neglect and vandalism. But it seems that someone took their graffiti skills to a whole new level at this location. Each of the 7 houses has been decorated from top to bottom with no portion of the houses missed with deviant phrases spray painted in a non -delicate way. 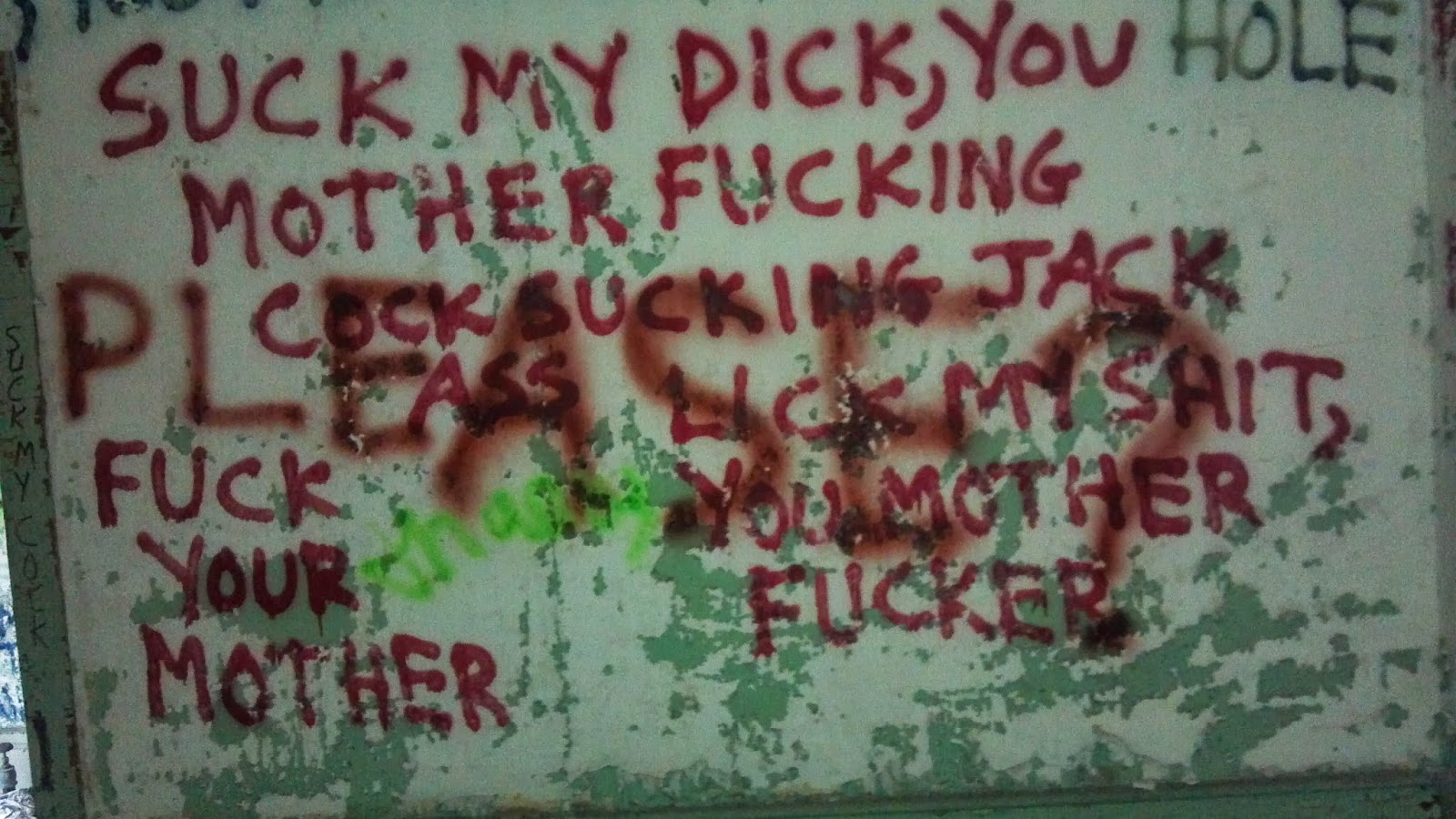 The way in was very interesting, from the road you can see a bar way back in the tree line but you have to venture down a dirt road to get to it. Upon passing the bar there is an even smaller dirt road that you have to traverse for several hundred yards until you come to an old imposing iron gate, from here you have to go on foot. Depending on the time of the year the forest here can be very thick and hard to walk through. Luckily when we went it was only medium thickness. 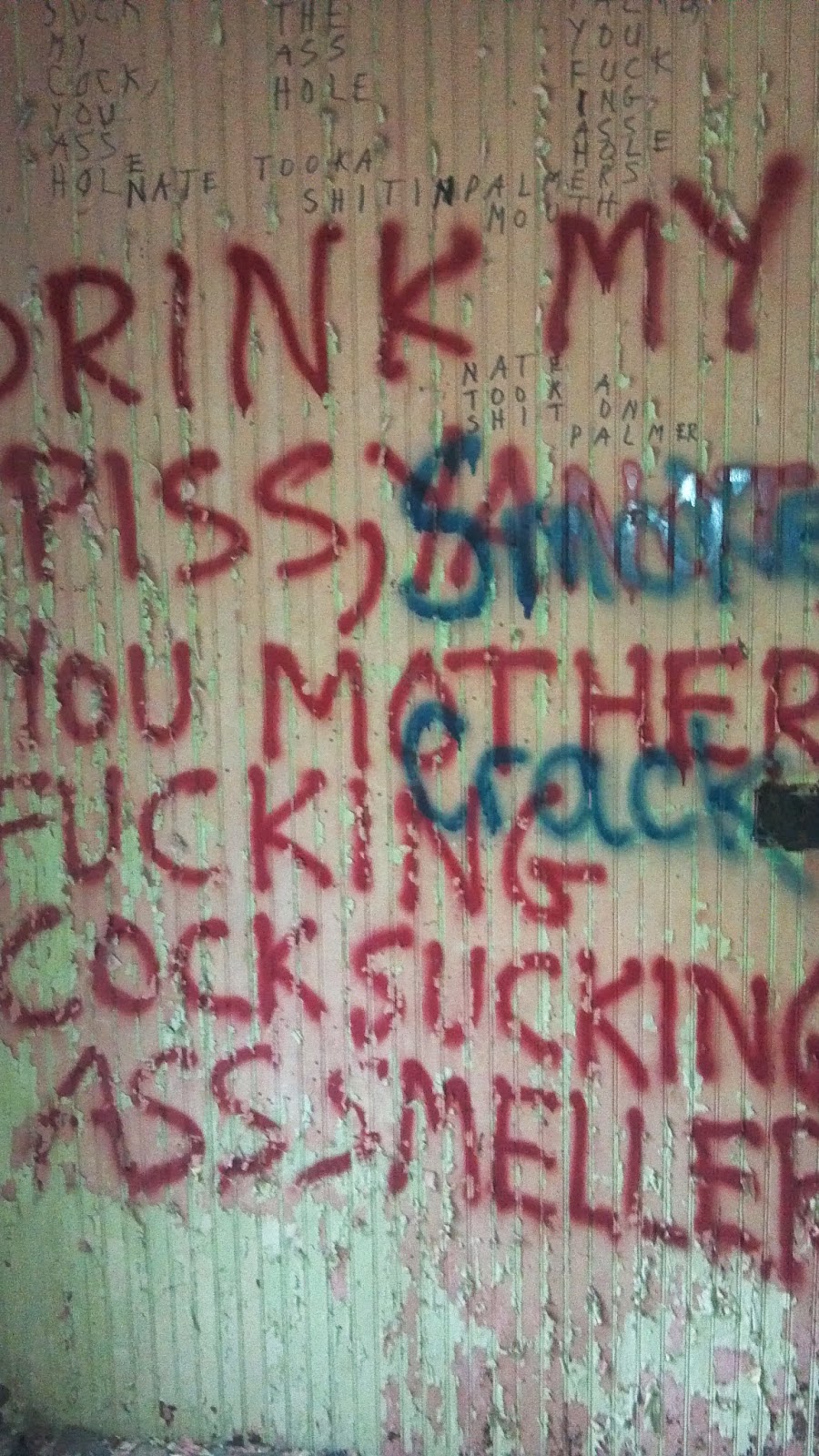 We walked to the 1st house and were impressed by its size. Sexual innuendos and graphic sex acts were spray painted all over the house greeting us with a taste of irony. The house was in moderate disrepair and the fear of falling through the floor laughed at us with each step. The person that did this "urban artwork" must have a lot of bottled anger due to targeting specific people in his work and the depth of depravity some of the sentences reach. It much have taken weeks to add their artistic touch to all 7 of these houses. If GG Allin were still alive I would say that he was involved. We plan to go back due to the fact that we missed 2 houses because there was no path to these structures and the sticker bushes and growth was just way too much to trek through. In one of the buildings we found an unidentified half skull which I added to our private collection. 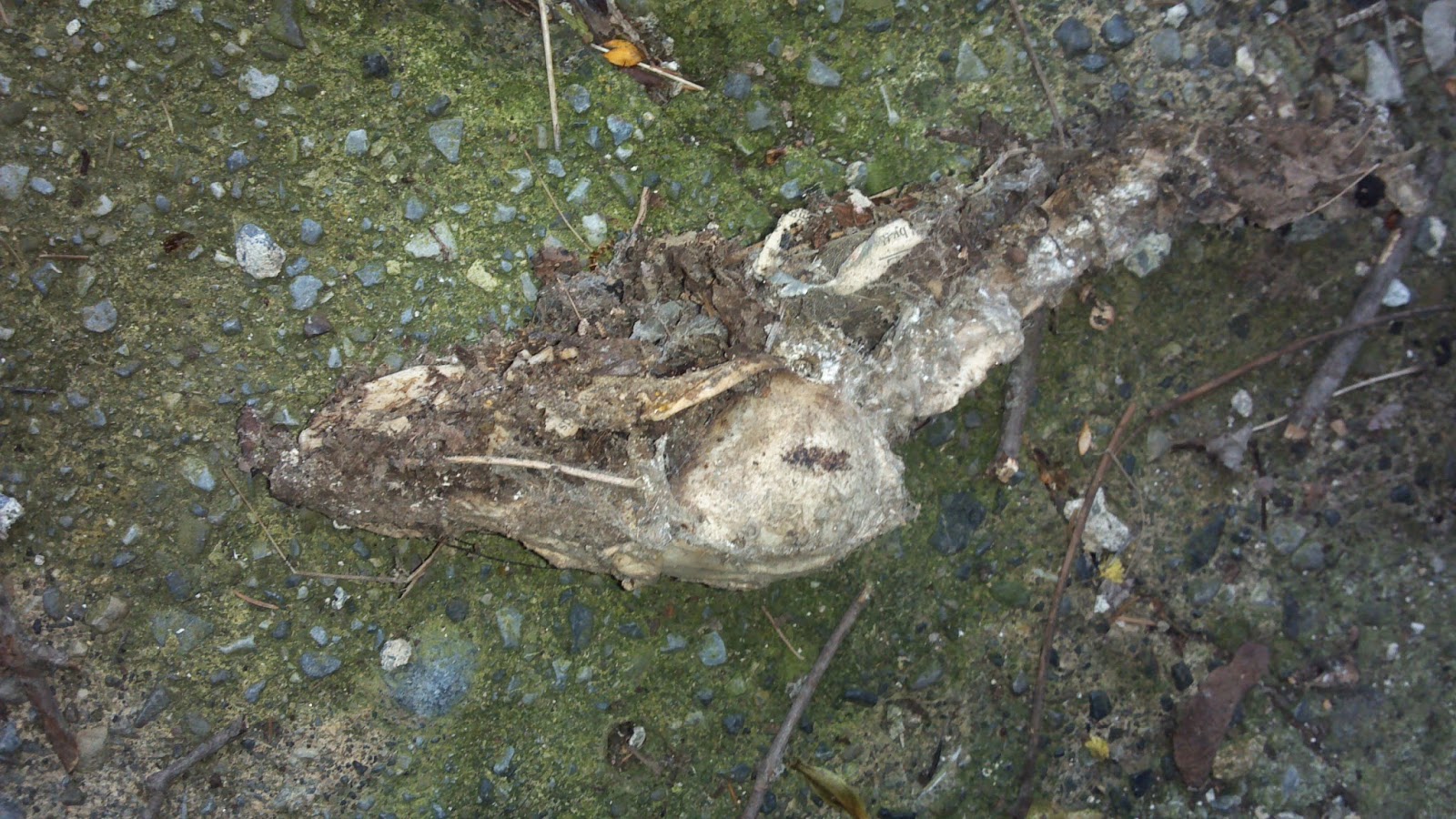 My personal favorite poem from these walls is: "Eminem gets fucked up the ass by Billy Goats" 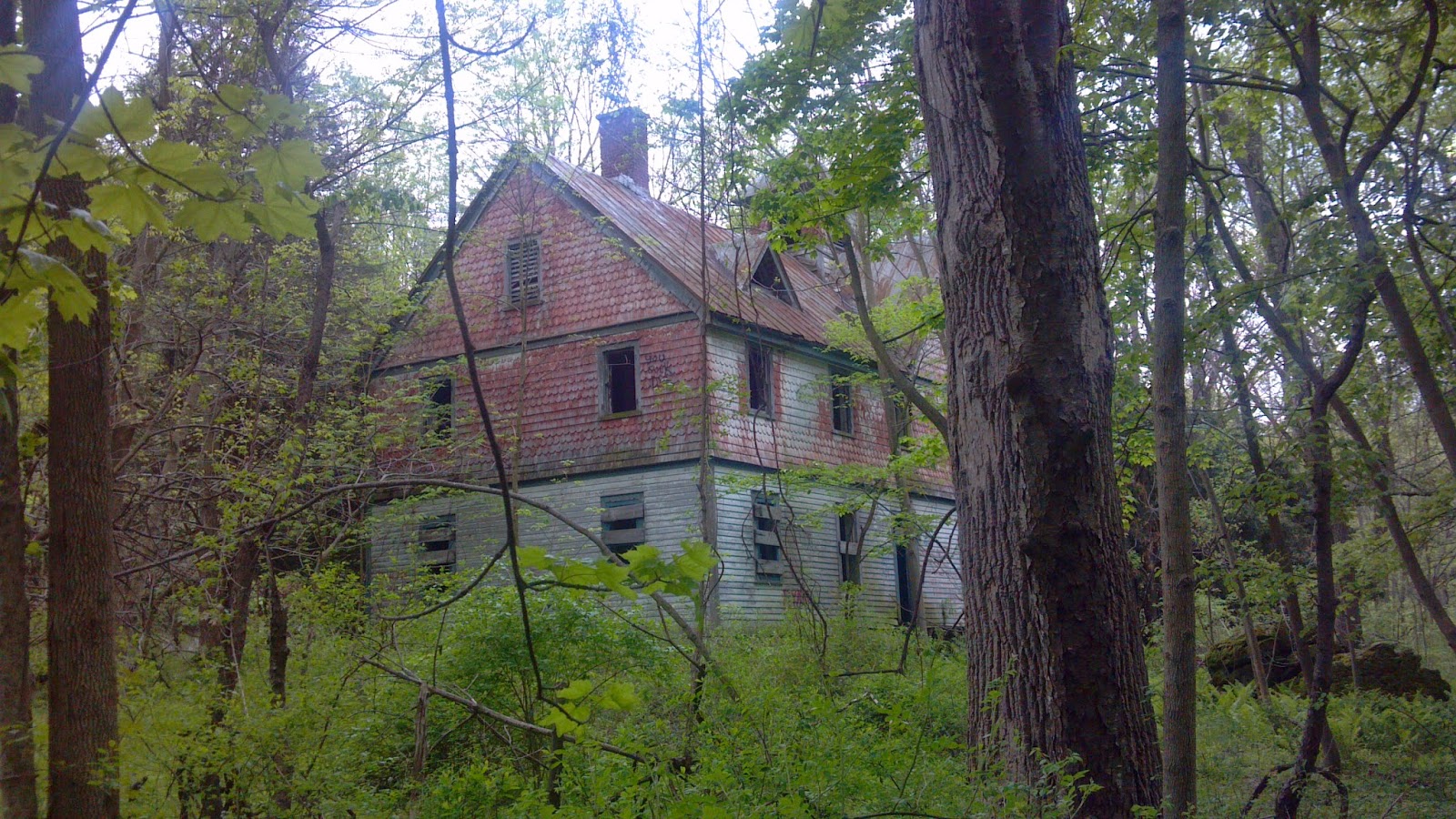 Exiting one of the houses we came across a haunting image of a moss covered shoe hanging from a tree. Obviously someone put it there long ago, but the image stays with me to this day. 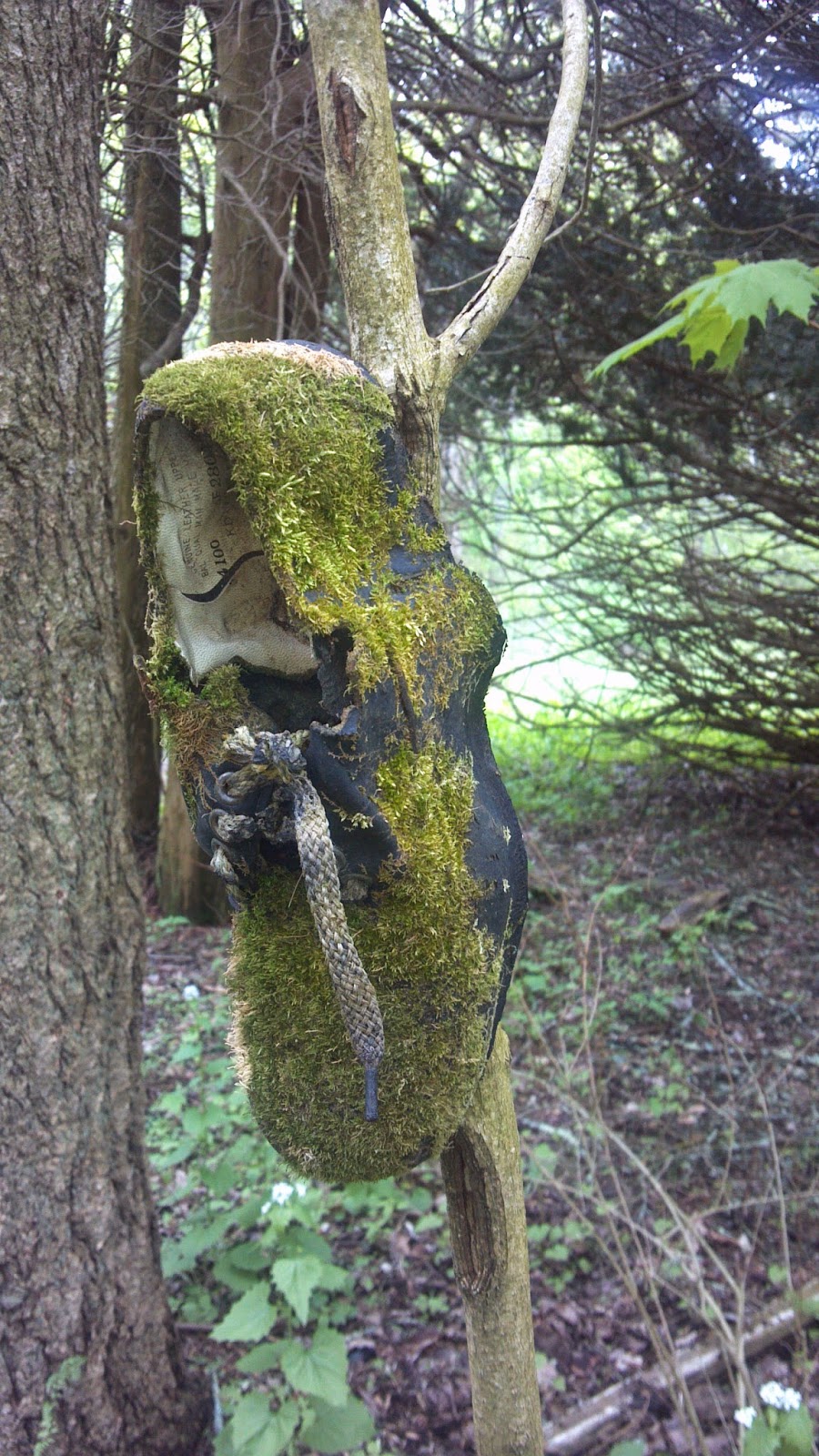 The state purchased the land in the late 1960's to build interstate 80 which split the estate and the 2 farms (Tranquility and Allamuchy) in two. On the Allamuchy Parks and Recreation web site it states, “The mansion burned to the ground in 1959 and was bulldozed under and the remaining farm buildings are completely covered with trees, brush, etc. and the area is definitely not safe or pleasant to roam around.”

Now the Tranquillity Farms is in operation across the road from the estate. If you check out the local cemetery just up the road you can also find many buried that share the Rutherford-Stuyvesant names. 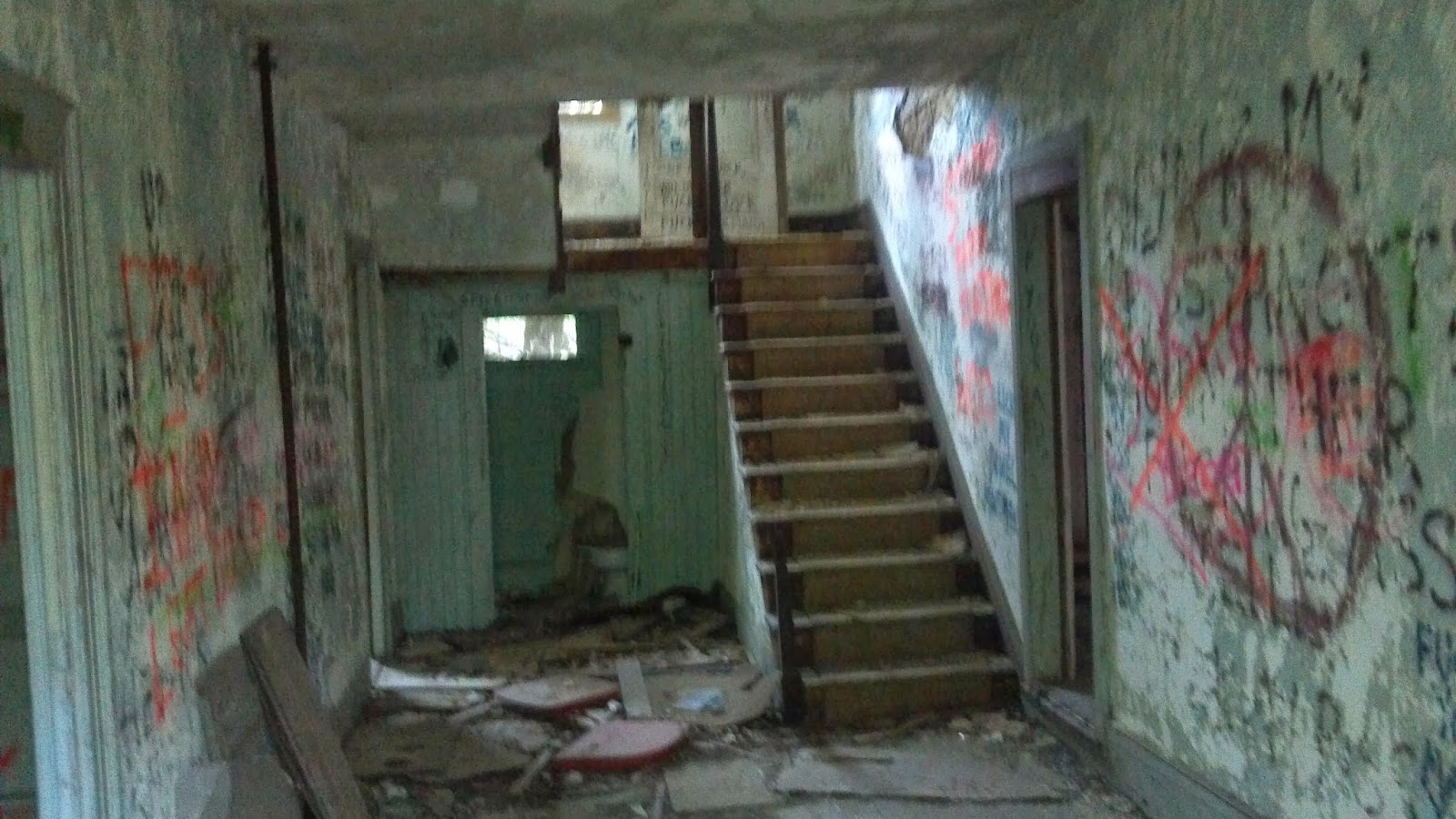 (Chris Chaos is a long time resident of South Jersey who once again resides in and writes from Gloucester City, New Jersey. He is a filmmaker, a business owner, writer, urban explorer and investigator of the odd and weird, a proud parent, happily taken and a connoisseur of hot wings. Chris can be reached at AxisVideo@aol.com)
Posted by Chris Chaos at 8:00 AM