Back on February 10th, 2010 we ventured off to find Martha's Furnace in Chatsworth, New Jersey. It was late at night and very dark, we did not have a jeep but we did have a car that was ill equipped for the terrain that we were to venture down. 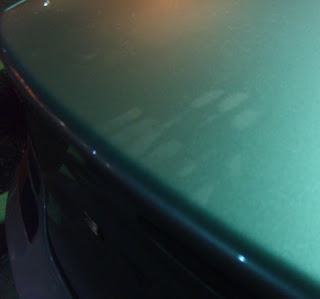 The mysterious handprint on the trunk

Across the street from the Historic Harrisville Ghost Town Ruins,we started down Martha Road, the road is simply a dirt road but eventually graduates to a loose sand and grass path that should be traversed either by foot or by Jeep.

There is rumor that along this path there is a glowing tree (possibly a bioluminescent tree?) that illuminates the Pine Barrens in the dark. This time around we did not make it back far enough to where the rumored tree resides, but in the near future we do plan on going back to investigate.

Nothing of interest occurred while on our journey, but we did reach a point that the car could no longer navigate along the path, so we vowed to come back, turned around and headed back out to the main road. 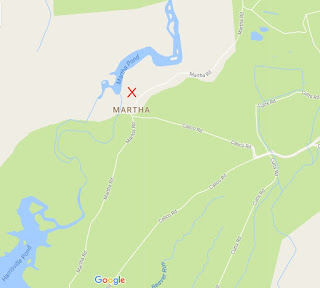 The location of Martha's Furnace

When we reached Chatsworth Road we took a break and stepped out into the cool night air. We noticed that on the trunk of the car there was a blatant hand print that promptly dissolved just as quickly as it appeared. This was an odd occurrence since neither one of us touched the trunk, but duly noted and a photo was taken prior to it disappearing.

***NOTE: this article will be updated once we venture back to Martha's Furnace, so this serves as a placeholder.

(Chris Chaos is a long time resident of South Jersey who once again resides in and writes from Gloucester City, New Jersey.  He is a filmmaker, a business owner, writer, urban explorer and investigator of the odd and weird, has a black cat named Jynx, four rats: Phantom the Dumbo Rat, Abbey the Albino, and two brown girls yet to be named, a proud parent, happily taken and a connoisseur of hot wings. Chris can be reached at AxisVideo@aol.com)
Posted by Chris Chaos at 5:05 PM