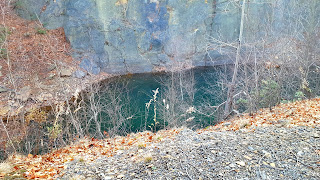 Many in the Girardville, PA (known for its rapidly growing annual St. Patrick's Day Parade) area are very familiar with the swimming hole known affectionately as the "A Hole", others may even know the "B Hole", but the legendary "C Hole" (Which is not even mentioned within Google Maps) has been located and documented by us in late 2016. (more info concerning the various locations will be added to this article one it is finalized) 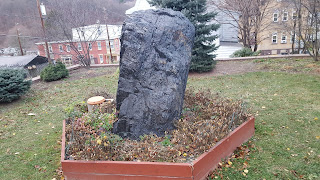 These holes are old abandoned mining locations and specifically, the A Hole collapsed in on itself. On the east end of the banks all the debris that was either thrown or blown into the body of water accumulates. Much of the old mining equipment is also located in the bottom of these bodies of water. 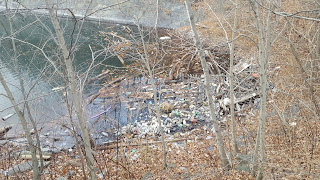 We spent 2 days exploring the mountain south of Girardville and the area around the holes; it was interesting that there was hardly any wildlife to be seen. Coyotes and bears have been known to roam the area, but the only animal that we spotted was a single doe.


Short clip of the A Hole

The town of Girardville is nestled in between mountains and is a former booming coal mining town that is currently in dire straits and fell onto hard times. The story is the same around the United States in towns hit by the economic downturn, people out of work, bored and hooked on drugs. 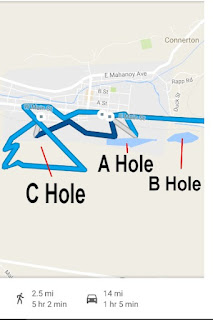 The 3 holes of Girardville

Above is a screen shot from Google Maps showing a rough path of our trek and the locations of the 3 holes, despite the fact Google fails to recognize the C Hole.

We spent two days on the mountain exploring the various trails along with the A and B Holes. On the second day we set out to look for the elusive C Hole. After about 5 hours of hiking we marched through a familiar site, a patch of pine trees on flat earth. 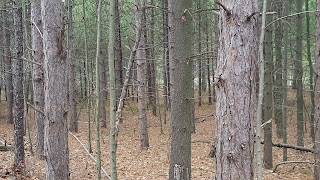 I felt like I was back in the NJ Pine Barrens


Short clip of the pine trees

After a brief stroll through the welcoming Pine trees and the flat ground, we came to another steep face of the mountain. Time to appreciate the flat land we just were on and to venture upwards. So up we went and climbed where we were met with a small waterfall. The water is naturally from the mountain, very cold but had a very metallic taste. 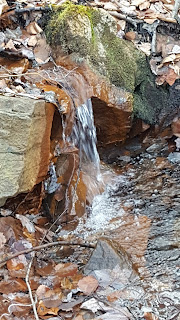 One of  the small waterfalls

It was a challenge navigating up the waterfall, but it was worth the effort once we reached the top.....we looked around and low and behold, there was the legendary C Hole on the other side of the cliff. Exhausted we spent a few minutes to take in the beauty of what we just discovered. 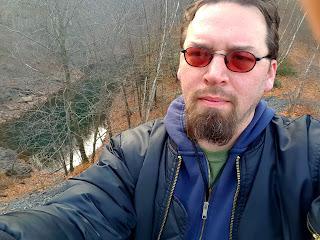 Chris Chaos at the C Hole

Heading east of the C Hole we were still climbing uphill until we hit the plateau which was covered in coal. The air was much thinner at this altitude so we decided to take another few minutes to catch our breath. For little did we know a greater adventure awaited us ahead.

After several hours of hiking we were very tired and we decided to head back to base camp. Our tour guide stated that he knew a short cut and we could cut down the side of the mountain and knock off about an hour of our return time. The terrain was pretty treacherous, the rocks hard, the incline steep and our feet were killing us. We came to a flat cliff side with an approximate 50 foot drop, we were in no condition to repel down so we trudged on along the edge looking for an easier path down. 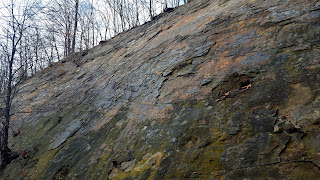 The further we went, the steeper the cliff became, we considered trying to slide down the mountain but that would have most likely proved fatal. Sunlight was fading and at this point we were kind of lost. So I figured if we just went back the way we came, I knew we could get off of this mountain hopefully before total darkness sets in and it gets too cold for us. About this time is when is when I thought we would be spending the night atop this mountain.

Luckily we found our way back along the same path in, but the retreat was in total darkness. 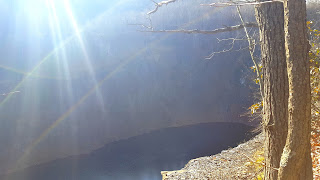 Looking down 2000ft into the A Hole

The A-Hole - Girardville:
A popular swimming and partying spot for generations. A cliff called "the big red", a beach, and a diving rock. On a good day, you can see the junkyard at the bottom. 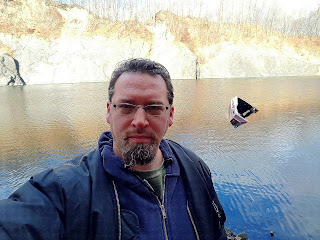 Chris Chaos at the A Hole with a sunken boat in the background
The B-Hole:
The B Hole lies at the foot of the mountain and in between the railroad tracks. It is on much flatter ground in comparison to the A Hole, which has sheer shale cliffs on one side and the mountain on the other. The C Hole is a few hours journey up the mountain and rests in between two mountain folds 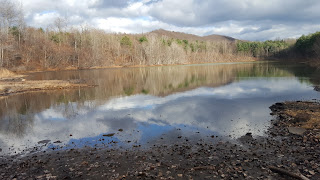 In retrospect, the trip on this mountain was very interesting, we saw may wonderful sights and encountered danger on the edge of the cliffs. One thing we encountered really had us baffled since we were about 75% to the top of the mountain and looked over a cliff spotting a mangled car about 50 feet down. The car must have been there for a very long time due to the fact there currently were no trails that would have allowed for a car to get up to this altitude on the mountain. 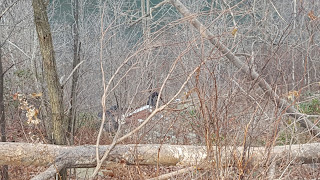 Mangled car up on a mountain side

A WORD TO THE WISE: As with any venturing into Nature, be very careful, the abandoned mines can be very dangerous: Danger in the mines.

(Chris Chaos is a long time resident of South Jersey who once again resides in and writes from Gloucester City, New Jersey.  He is a filmmaker, a business owner, writer, urban explorer and investigator of the odd and weird, has a black cat named Jynx and two dumbo rats named Opera and Phantom, a proud parent, happily taken and a connoisseur of hot wings. Chris can be reached at AxisVideo@aol.com)
Posted by Chris Chaos at 9:14 PM