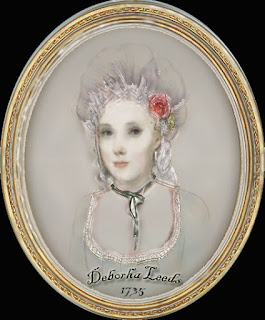 The facts: Deborah Smith was born in 1685 in Burlington County, New Jersey and died as Deborah Leeds in 1748 in Atlantic County New Jersey. She was a Quaker and married Japheth Leeds giving birth to 12 of his children. Deborah was (possibly) the daughter of Daniel Smith and Mary Murfin. There is much speculation and much of the details may have been lost to time. In those times it was an old practice to name the first son after the parents, which in her situation was not true. Deborah named her first son Robert, and her sixth son, Daniel, bore the name of her father. Japheth's father was also named Daniel. Her first child Mary was born 1704, and her last known child by Japheth, Hannah, was born 1726. 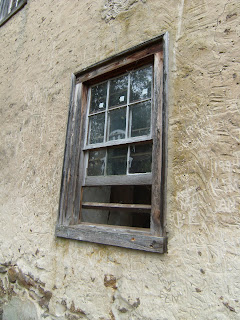 There were many legends connected with Deborah, one of them was that she was a witch and many modern databases have her listed as a Pagan. But many that were not in direct discipline of the same relgion as of those around them will be labeled a heathen or a pagan.

There is a strong possibility that the parents of Deborah were Thomas Smith and Ann Pancoast (both born about 1660 and from Yorkshire England) of Cohansey, Salem, New Jersey.They are listed as the parent's of a Deborah Smith born September 23,1687 in the Family Data Collection. And there is an underage Deborah Smith in Thomas' Will dated 1692 (Deborah born about 1684, she would be 8):

There is a John Smith who married Elizabeth Ball in 1685, the year of Deborah's birth. There is also the possibility that she came over from England already bound to marry Japeth Leeds as indicated in "Brigid's Charge" by Cynthia Lamb. There is a Deborah Smith listed in Passenger and Immigration lists for the year 1702, two years before the date of birth of her first child. In Genealogical and memorial history of the State of New Jersey says that Deborah is supposed to be the daughter of Daniel Smith, of Burlington.

Much research would need to be conducted to find a birth record , perhaps in old Quaker meeting records of Burlington County, New Jersey, we can't be sure. We do know that there were several Smiths who attended Quaker Meetings along with her husband's family.Checking census records for the area, Deborah and Japhet did have a confirmed 12 children. In the Leed's Point area she is the only person that fit the profile of Mother Leeds without embellishment. The time frame was right on also since most legend place the Jersey Devil's birth in 1735. Since her last (confirmed) born child was born in 1726, in 1735 Deborah would have been 50 years old. Back in the 1700's it would have been highly unlikely that a woman in her 50's would have had a successful birth due to the primitive medical care. This might lead us to speculate and explore the possibilities that the 13th child was born handicapped, mentally retarded or disfigured over a real life devil or beast. 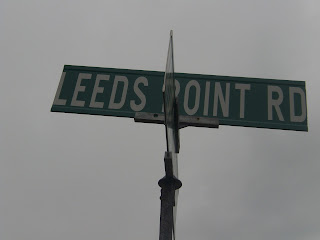 Having been baptized Episcopalian in February of 1704 in St. Mary's Church, Burlington, NJ, at age 21, he must later have returned to Quakerism as according to Great Egg harbor Monthly Meeting minutes: Peter White and Jonathan Adams appointed overseers of the meetings held at Japhet Leeds.

Per minutes of Haddonfield Quarterly Meeting states that in 1726 there were three places for holding Friend's meeting in this county: Japheth Leeds', Peter White's and John Scull's, which were Leeds Point, Absecon and Somers Point, respectively.

In 1710 he purchased from his uncle, Felix Leeds, Further Island (Atlantic City) that in 1707 his father had sold to this uncle. From his father he received Leeds Point containing approx 800 to 1000 acres.

Japhet and Deborah Leeds settled at Leeds Point, Gloucester Co., NJ. Japheth's house stood well out on the Point. It was an old fashioned hip roofed structure, known as the Homestead and was successively occupied later by Japheth the 2nd, and by his son Samuel and by the latter's youngest son Barzillai. Leeds Point is a promontory with Great Bay upon one side and Little Bay on the other and is said to be the highest coast side land between the Highlands of NJ and the Capes of VA. Upon the very top of this noticeable elevation is to be seen an ancient graveyard in which, it is supposed, rest the bodies of Japheth and his wife.

There are also political/religious reasons for the legend of the Jersey Devil to appear. Deborah was a Quaker and possibly converted to Episcopalian after she married Japhet. He was also a Quaker but in 1688 had a falling out with his church and then converted to Episcopalian and was christened at St. Mary's of Burlington in 1703. This rift may explain why Deborah was accused of being a witch and how the word "devil" made it into the Leed's/Jersey Devil's name. 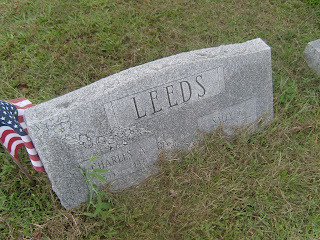 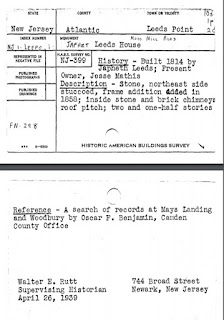 There are some very interesting resources online concerning the various family members associated with the Jersey Devil, above are the original scans of the survey for Japhet Leeds' house along with the blueprints for the house that can be viewed at: www.loc.gov/item/nj0204/

There is strong possibility that the parents of Deborah were Thomas Smith and Ann Pancoast (both born about 1660 and from Yorkshire, England), and now living in Cohansey,
Salem, NJ. They are listed as the parent's of a Deborah Smith born on 9/23/1687 in the Family Data Collection. And there is an underage Deborah Smith in the Thomas Will dated 1692 (Deborah born about 1684, she would be 8.) They lived at Great Egg Harbor, Leeds Point area, in Galloway Township, Atlantic County New Jersey. (Kintzel, 2017)

One of the earliest known (fictional) stories in print about the Leeds Family is documented in a 1859 Atlantic Monthly article by W. F. Mayer, entitled "In the Pines."
“There lived, in the year 1735, in the township of Burlington, a woman. Her name was Leeds, and she was shrewdly suspected of a little amateur witchcraft... One stormy, gusty night, when the wind was howling in turret and tree, Mother Leeds gave birth to a son whose father could have been no other than the Prince of Darkness. No sooner did he see the light than he assumed the form of a fiend, with a horse’s head, wings of a bat, and a serpent’s tail.

The first thought of the newborn Caliban was to fall foul of his mother, whom he scratched and be pummeled soundly, and then flew through the window out into the village, where he played the mischief generally. Little children he devoured, maidens he abused, young men he mauled and battered; and it was many days before a holy man succeeded in repeating the enchantment of Prospero. At length, however, Leeds’ Devil was exorcised but only for one hundred years." (Mayer, 1859)

(Chris Chaos is a long time resident of South Jersey who once again resides in and writes from Gloucester City, New Jersey.  He is a filmmaker, a business owner, writer, urban explorer and investigator of the odd and weird, has a black cat named Jynx, four rats: Phantom the Dumbo Rat, Abbey the Albino, and two brown girls yet to be named, a proud parent, happily taken and a connoisseur of hot wings. Chris can be reached at AxisVideo@aol.com)