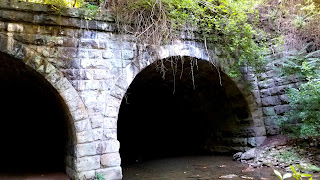 The two tunnels away from the road

Many legends, along with truth and mystery, have cursed this desolate location. These tunnels, also known as the Downingtown Tunnels, are home to various suicides, an unsolved murder and a popular teen hangout. 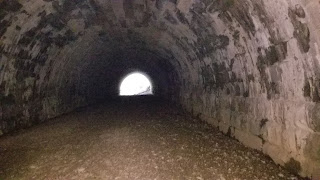 Within the middle tunnel

The tunnels are along Valley Creek Road, which runs along Valley Creek. The narrow road is a journey of twists and turns around every corner. They are located right outside of Downingtown, PA. Railroad tracks cross over the tunnels, which contain three tunnels, not two as the name implies. 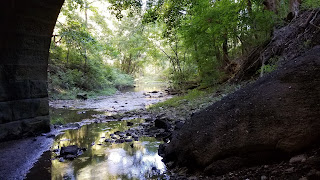 The far end of the tunnel

The first tunnel contains the road, the middle tunnel is empty, flat and sandy, and the third contains Valley Creek. The third tunnel that contains the Creek can be navigated if you wear hip waders. The middle cave is easily traversed, but can become a bit muddy. The tunnel containing the road is too narrow to be walked through without becoming roadkill. 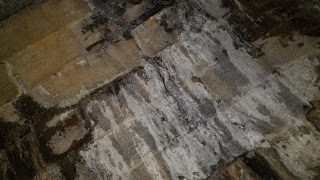 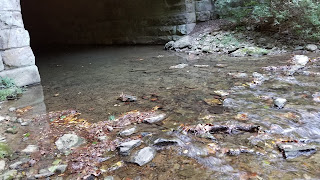 In the middle of the tunnel, the one that contains the road, there is an air shaft cut out that leads up to the tracks up above that allowed the steam and coal to escape and the sunlight in. Approximately in the 1800's a young unwed women became pregnant and once the child was born, the townsfolk drove her out of town. She hung herself in the exposed shaft, still carrying the baby, which plummeted to its death becoming fodder for legends years later. Visitors to the tunnels state that late at night, you can still hear the baby crying. Which I would assume is the ghost of the baby since it was alleged that the baby died when it fell to the tunnel floor. 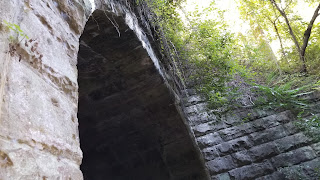 Other claims and legends associated with the tunnel concerns a man who hung himself on the connector wire. This is where the footsteps, wire snaps and other haunting noises come into play. But of course you must park your car within the tunnel late at night to experience these sounds. Others state that if you are unlucky enough to be driving through the tunnel late at night you may see the ghost of the man hanging from the wire. 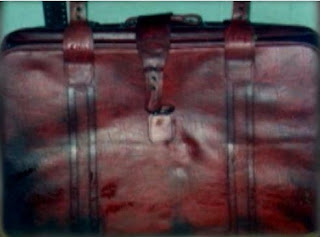 The suitcase the body was found in

One story that is absolutely true and can be verified with the local police department is the case of the "Torso in a Suitcase." Back on July 11th, 1995 a suitcase, tied with wire, was found in the creek adjacent to the tunnels. A fisherman discovered the suitcase, which was wrapped in a garbage bag and taped shut. When the police arrived they discovered the nude upper half of a woman, wrapped in a sheet and a quilt. The legs of the body were cut off and not located near the scene. The only clothing on the body was a blood stained bra. 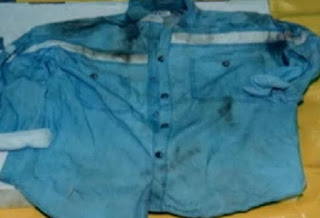 The shirt found within the suitcase

The police are still baffled by this find and she still remains to be identified. The summer heat and the water deteriorated the body so no fingerprints could be taken. An autopsy revealed that the woman had likely been killed 3 to 7 days prior to being found.  Cause of death was inconclusive.  There was no indication of strangulation or sexual assault.  She had a bruised right eye and two small bruises on her back, possibly indicating her trying to flee her killer but no indication of a fierce struggle.  She had no drugs in her system and her blood-alcohol level indicated a possible consumption of one, maybe two drinks prior to her death. 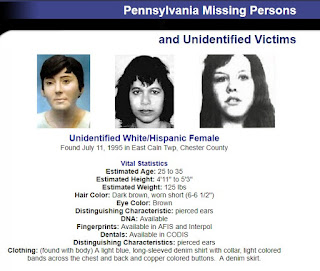 The recreation: Hispanic and Caucasian

Speculations has stated that a local biker gang may have killed and then dumped her body at this location. Some locals report that within the tunnel you can still her the woman's voice crying for help, "Help me!" Even in the daytime the tunnel is very dark. If you take a flashlight you can see some of the graffiti that is associated with this crime. "Take a chance, look up", "We all die here" and a few other selections are gloriously spray painted on the walls of the tunnel. 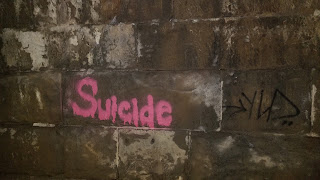 6 months (1-29-96) after the suitcase was found, skeletal legs, wrapped in trash bags, were found approximately 50 miles away. As with the rest of the body, time and the weather was not kind to the remains proving difficult to extract any DNA to link all the found parts. Several pathologists examined the body parts and deduced that they all belonged to the same person based on the similar cuts and the legs matched the torso perfectly. Due to storage constraints, it was customary of the times to cremate the body parts. 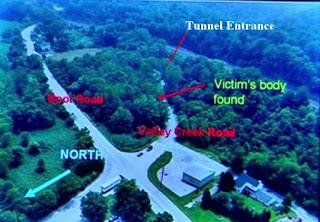 Aerial of the area

Found nearby was another green trash bag, the same kind that help the other body parts. Within this bag was a blue, black and pink sweater, size 10, Jet Set brand with Mickey & Minnie Mouse on it; a denim jacket with a red border at the bottom, Bonjour brand; a small black jumper. Found away from the trash bag was a white blouse with black and gold buttons. The sizes of the clothing were consistent with those found with the torso. 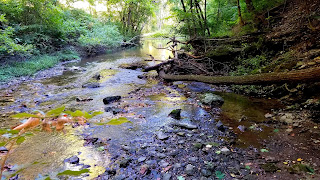 "I remember that case very well. It haunts me regularly...It was a grisly discovery once we opened the suitcase. These things are forever embedded in my mind," Sarcione said. "That case was one of the most haunting cases I dealt with as DA. I can't just put some of those images I saw there out of my mind...It was one of the most gruesome scenes I've had to view in my career of over 25 years in law enforcement." (Chester County Common Pleas Judge Anthony Sarcione was the county's district attorney when the Jane Doe mystery unfolded)

If you have any information about this case, please contact:

Chris Chaos is a long time resident of South Jersey who once again resides in and writes from Gloucester City, New Jersey.  He is a filmmaker, a business owner, writer, urban explorer and investigator of the odd and weird, has a black cat named Jynx, two rats: Hopping Heather and Climbing Carol, a proud parent, happily taken and a connoisseur of hot wings
Posted by Chris Chaos at 12:41 PM