The Case of the Mysterious Shaking Door Knob

***NOTE***: The partial article concerning the Country club itself is located at the bottom of this article and the top section deals strictly with the shaking knob. 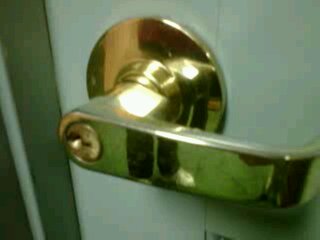 The door knob in question

A few years back we investigated a country club that people thought was haunted. There are several spots and locations within the building and property that gave you a "weird feeling" but after the investigation we only came across two anomalies that could not be explained. The first was the door leading from the men's locker room into the boardroom vibrated and shook for no logical reason. It was late at night (after midnight) and no one other than our team members were present. The location is private and distant from any major roads and traffic. We timed the AC unit to make sure it was not vibrating the building and causing the knob to shake. This is one of the few and very rare occurrences that we came across that was not readily explainable. 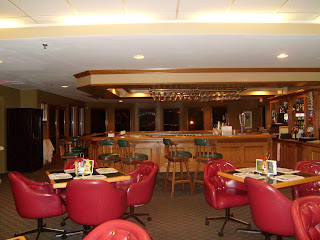 The second anomaly was in one of the photos taken in the bar area appeared that a being was peering into the window from the outside. Humorously it curiously resembled Bigfoot, but once we analyze the photo in greater detail we will release it.

May 4th, 2012 the investigation was conducted. This is a building with a rich history and was built in 1929. Prior to it being a golf country club it was an old farm house. Throughout the years the owners added on to the original building and made it approx. four times as large. We can only speculate how many old timers must have had heart attacks on the golf course and keeled over. There are several spots on the property that you always "get that feeling" when you are there. The first location is on the second floor in the entrance way to the men's locker room. For some odd reason when you go through the door it always feels like someone or something is right behind you. The hairs on the back of your neck and arm stand on end and you feel a presence. In the same section there is a door that leads to the boardroom and on an occasion we filmed the door knob rattling for no reason (See above for the results). 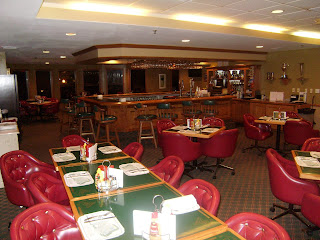 More of the bar area


The second location that many people feel something odd is the hallway leading back from the ladies locker room and the administrative offices. It feels as if there is an unknown watcher creeping around the corner, the hairs on your neck stand up and the atmosphere makes you feel uneasy. When the normal lights are turned off the safety lights come on and they are tinted red and give an ominous glow to the surroundings. 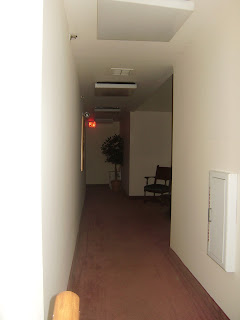 We did a session and took many photos but all appeared normal except for one photo. It was in the dining room looking towards the windows, it looked as if a Bigfoot creature was peering into the window. With the naked eye you couldn't see anything and the photos from other angles didn't show anything out of the ordinary.

Other notable info concerning this property is that there are also approximately 20 feral cats that roam around on the property and deer also strut across the course being so near to the forests.

The video of the door knob

(Chris Chaos is a long time resident of South Jersey who once again resides in and writes from Gloucester City, New Jersey.  He is a filmmaker, a business owner, writer, urban explorer and investigator of the odd and weird, has a black cat named Jynx, four rats: Phantom the Dumbo Rat, Abbey the Albino, Hopping Heath and Climbing Carol, a proud parent, happily taken and a connoisseur of hot wings. Chris can be reached at AxisVideo@aol.com)
Posted by Chris Chaos at 8:00 PM