The Legend of Boody Mill Road in Mantua, New Jersey 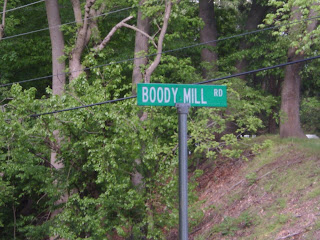 The entrance to Boody Mill Road

It seems that just about every town in New Jersey has some sort of lore and urban legend associated with them. Mantua New Jersey is of no exception; off of Route 45 there is a little side road named Boody Mill Road and has a gruesome story attached to it. 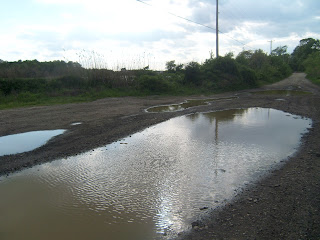 The day we visited this location it was a sunny day with blue skies and huge billowing clouds overhead, the previous few days were rainy and over cast, so this was a welcomed change. Traveling down the road, we passed several nice homes on a very twisting and narrow road, yes, truly a one laner.

Back in 1989 there was some controversy started:
"......The road served as a dam for the lake. When the heavy rains poured into Gloucester County July 5, the old spillway pipe under the road cracked and gave in. The road's gravel, sand and blacktop caved in around the break, and the lake poured over it. Now, in place of the road is a gully 40 or 50 feet deep though which a stream rushes." (Excerpt from Philly.com August 16th 1989) 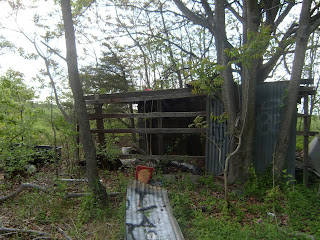 One of the remaining structures

A few hundred yards in we hit a dirt road that went on for several hundred more feet, and we started encountering deep mud puddles and didn't want to get the car stuck so we got out and continued on foot. After a short hike we found an opening on the side of the road and entered. Several bags of trash and hundreds of beer cans greeted us....along with several shelter shacks and shanties..looked more like a homeless hang out or a teenager party spot. The legendary house in the stories was gone, the trailer also. Not much here was left other than what looked like a party spot for wayward teens. One of the eeriest thing about this place was the lonely baby car seat left behind... 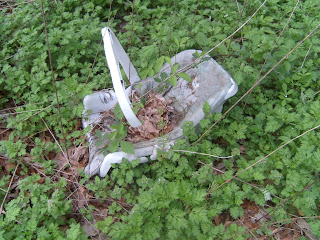 The lone baby car seat, one wonders how it found it's way here

THE HISTORY/LEGEND:
Back in 1992, a guy and his wife got into an argument which resulted in her leaving him and his kids behind. He reportedly went insane over this new arrangement, so one night while his kids were sleeping, he torched the house with them inside of it, killing them all, and then went out back, sat in his truck, and shot himself in the head. Ever since this incident, the torched house supposedly remained haunted. Legend has it,  everything in the house was burnt to a crisp except for a table with a bible sitting on top of it. 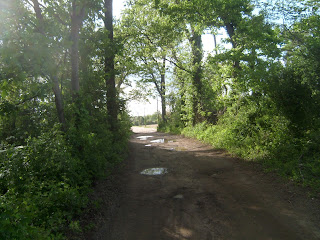 Narrow dirt section of the road

The bible is a little blackened, but in no way burnt up as you would expect in a fire, and still is legible. Across from the charred house is an open field, and if you park your car on that field at night and face it towards the house, you will see things. Supposedly if you are quiet, you can hear the sound of little kids playing out in that field, but why would young kids be playing outside past midnight? Sometimes you will hear something tapping on your car, and other times you might get a quick glimpse of somebody's face in your rear view mirror. 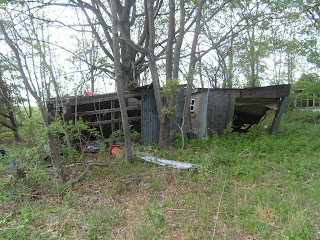 Of courses as stated above, most of the components of this story no longer exist so we did not experience anything told in the tales. Have you been to this location? Have you any stories to tell concerning this legend? 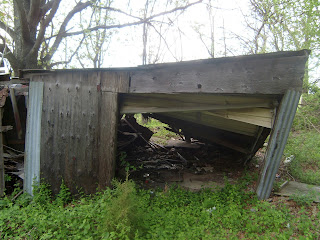 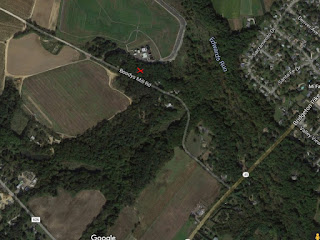 Since we released this story a few years back many people contacted us asking us to retract the story since they live on the street and are tired of the endless sightseers that trespass on the property and are not respectful to the residents of the street. We ask that whenever you venture anywhere to please respect the privacy of the people that may live in the area. Take nothing but photos and leave nothing but footprints.

Here, The Cursed Website, we have more photos concerning Boody Mill Road along with other locations filled with Legend, Lore and History.

(Chris Chaos is a long time resident of South Jersey who once again resides in and writes from Gloucester City, New Jersey.  He is a filmmaker, a business owner, writer, urban explorer and investigator of the odd and weird, has a black cat named Jynx, 2 rats named Phantom and Opera, a proud parent, happily taken and a connoisseur of hot wings. Chris can be reached at AxisVideo@aol.com)