An Independent Investigation of a private residence in Gloucester City, NJ

In June 2011 we conducted an investigation at a private residence in a location that was reported to have some subtle activity occurring for a few months. The activity was reported to take place primarily under the kitchen table. The residents stated that the young child (2 years old) in the house sometimes acted uneasy while near the table and spoke of a little ghost boy named Jimmy that she would talk to from time to time. It was also reported that doors would often open or close on their own and sometimes it felt as if someone or something was watching you. 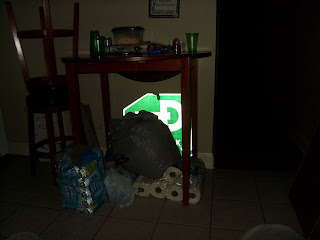 The table with the activity

Before we set up for the investigation we took precautions and all windows were closed to minimize outside noise/air and temperature. The central air was also turned off to prevent any air currents. All TVs and electronics were turned off and the house was thoroughly inspected to make sure no one else was in the house and no animals were present. 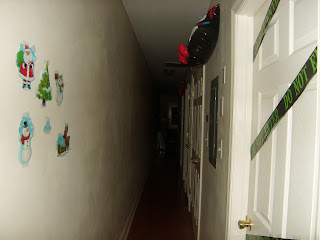 Using a laser temperature gun we recorded a baseline temperature reading of 68 degrees under the table where most of the activity was reported. We set up an observatory area in the kitchen adjacent to the table and turned off all the lights. While running some tests we decided to attempt to record some EVPs and try to communicate with whomever or whatever might be there. When
we took the next temperature reading it dropped to 63 degrees. 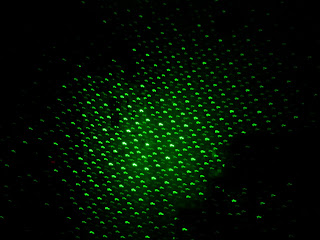 Laser grid pen in action
We posed several general questions about who they are/were and what they might be doing at this house. We also asked if they could make themselves known and to tap 3 times. After we asked the question we heard a noise that sounded like someone flicking a plastic bag in sequence 3 times. After further probing into getting the force to make itself known, the plastic bag started to rustle and then it slid down to the floor. We set up and used the green laser grid but didn’t see anything out of the ordinary and none of the barriers of grids were broken. After the bag slid down we did not hear any other noises. 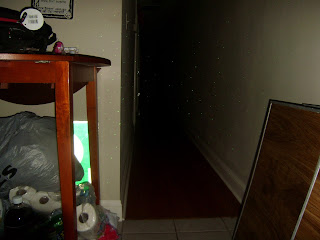 Laser grid pen in hallway
After reviewing the audio recording  we didn't detect anything that wasn’t explainable other than the bag rustling. After a few more minutes we decided to move our set up to the living room. 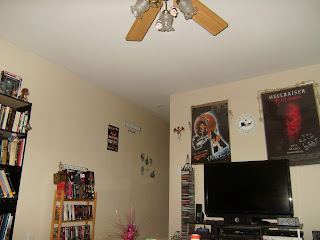 Livingroom where more activity was noted
After leaving the kitchen and setting up in the living room to change the location that was being investigated, we also double checked the house to make sure that no conditions have changed. The baseline temperature for the living room was 64-65 degrees. When we started the session the
temperature rose to 69 degrees. In some of the photos that were taken we noticed an odd shape appear but in subsequent photos it disappeared. Also after some time the temperature returned to the baseline temperature of 64 degrees. There were no lights, sources of heat, electronics or any
other logical explanation for the rise in temperature. Traditionally it is a belief that the
temperature will actually lower when a spirit or ghost is present. 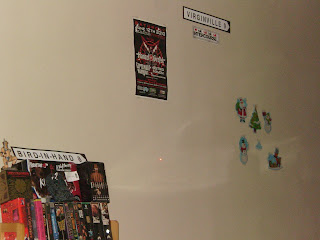 In the photos that were taken near a DVD/VHS rack and the poster/decorations there is some sort of white unexplainable glare. It is in all the photos of that area up until a certain point and then disappears. At 1st I thought it was a reflection or a glare, but it is not since it is in the exact same spot in each and every photo and even when the photos were taken at different angles. Also there were no light sources to cause the glare. In another photo the object moves to the right a bit further and down the hallway. Then all the photos taken after that point do not have the glare in the photo. The easy explanation is that it is a reflection...but over the course of several photos and angles it just cuts out for not reason. 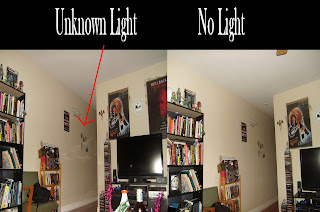 The previous investigation we determined that there appeared that there was some sort of force under the table which we did receive a response from in the form of 3 knocks and a rustling of bags. So we decided to do a follow up investigation to see if we could communicate with it. In the kitchen we used the laser grid again, which didn’t produce anything out of the ordinary, we also used an audio recording device to see if we could capture any EVPs (this will take a few days to analyze) and took several photo. We made sure all the lights were off and anything that could produce a sound was silenced or turned off. On a few instances all 3 of us could hear what sounded like heavy breathing and just random noises coming from the living room. 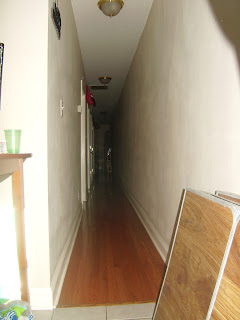 hallway
We used the laser under the table and saw that the temperature there dropped to a low of 64 degrees whereas the rest of the area still held the baseline temperature of 70-71 degrees. We tried to communicate and asked for 3 knocks but that produced no suitable results so we decide to move to the living room again like the previous investigation.

On the previous investigation we took several interesting photographs and this time around we obtained similar results. Several photos were taken above a DVD rack and around a picture frame and for the 1st 4-5 photos there was nothing out of the ordinary there. Then we saw the odd white
triangular shape there once again. Several more photos were taken and it seemed to move within a 3-4 foot area. It was pitch black but occasionally we would turn on a flashlight to see if anything could be detected by the naked eye, which it could not be. A temperature reading of where
the white shape was came up at 67 degrees, 3 degrees colder than the base line taken moments before. So this night’s results weren’t as fruitful as the 1st investigation, but we still acquired similar photos of something in the living room area.

End result: We could not determine if there was or wasn't anything in the house and the positive finds were on the first night when we asked for 3 knocks we heard the plastic bags get flicked 3 times.

We did a research on the history of the property and did not find anything out of the ordinary, the business downstairs was a shoe store and then eventually turned into a high end restaurant bar which it still is to this day.

Bar adjacent to location, interior
(Chris Chaos is a long time resident of South Jersey who once again resides in and writes from Gloucester City, New Jersey. He is a filmmaker, a business owner, writer, urban explorer and investigator of the odd and weird, a proud parent, happily taken and a connoisseur of hot wings. Chris can be reached at AxisVideo@aol.com)