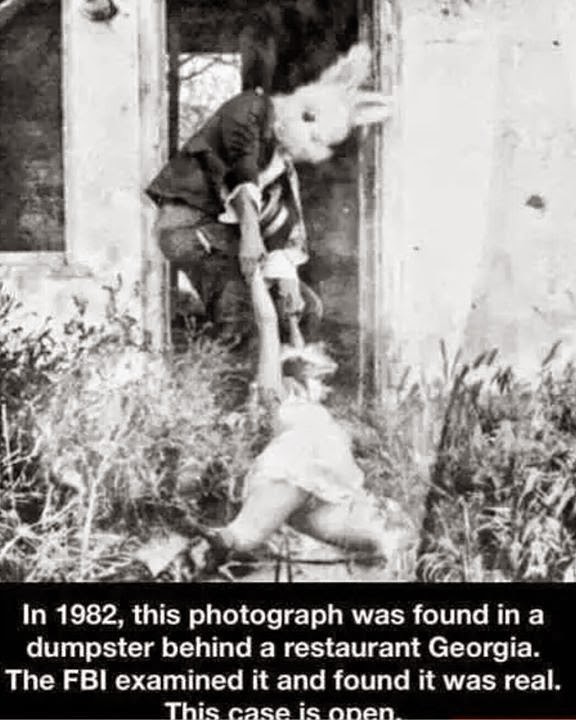 Recently this photo began circulating around the internet and immediately raised speculation on what it could be. Many state that it was an old photo of The Bunny Man kidnapping a girl and pulling her into his lair. But supposedly it was found in 1982 in a dumpster in Georgia.

THE LEGEND OF THE BUNNY MAN
Comprised of many different versions, the story of The Bunny Man is an urban legend based out of Fairfax County Virginia from 1970. The legend goes that a man will don a bunny suit and attack people with an axe. The Bunny Man supposedly stalks and hunts on Bunny Man Bridge... "Bunny Man Bridge's" real name is Colchester Overpass which is located near Clifton. 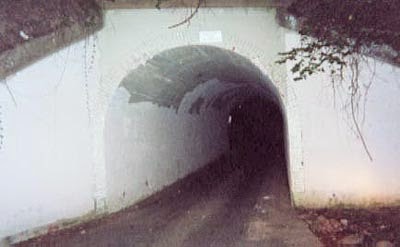 Brian Conley, the Fairfax County Public Library Historian-Archivist, has researched the legend of the Bunny man and he discovered two separate incidents, occurring one week a part in 1970, where a man in a bunny costume threatened people. These incidents occurred in Burke, Virginia. October 19th, 1970 an incident was reported by an Air Force Cadet by the name of Bob Bennett. His fiancee and himself were visiting family members in Burke and about midnight they parked their car on Guinea Road. While talking they saw something moving out the back window. A few seconds later the window on the passenger side was smashed in and a mysterious figure, appearing in all white was standing there. As Bob tried to speed off, a man yelled at them: "You're on private property and I have your tag number." As they drove away Bob's fiancee noticed a hatchet on the floor, this is what was  thrown through the window. 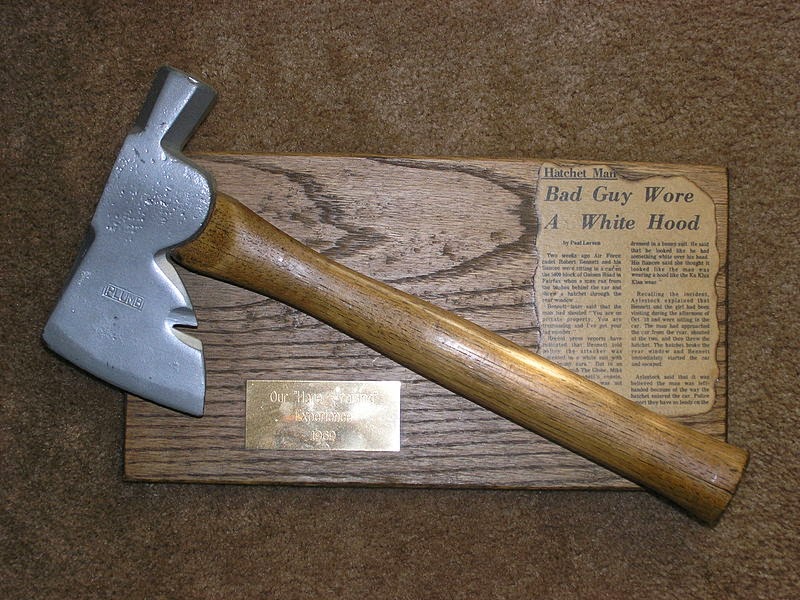 Bob drove to the police station so that he could report the incident and gave the description of a man in a bunny suit with long rabbit ears. His fiancee reported a description more along the lines of a man in a Klan suit with the pointy hood. The hatchet was returned to the couple once the report was filed.

On October 29th, 1970 a second incident was reported by a security guard named Paul Phillips. Paul saw  a man standing in front of a house in a construction site and decided to investigate. Paul stated that the man was wearing a bunny suit that was grey, black and white and he appeared to be in his 20's, approx 5 foot 8 inches and 175 pounds. As Paul approached the man in the bunny suit started to swing an axe into a porch and started yelling: "All you people trespass around here. If you don't get out of here, I'm going to bust you on the head."

The local police department launched an investigation but there were no leads or additional information so the cases were closed. But...after the two above mentioned incidents over 50 people claimed to have spot The Bunny Man and a few newspapers ran articles on this wascally wabbit:

As stated previously there were several other versions to this legend. One even named a suspect Douglas J. Grifon (who was placed in prison for killing his family on Easter Sunday) as the Bunny Man. Legend has it that back in 1904 inmates were being transferred from a shutdown prison asylum to a new building and several escaped during a crash. All prisoners were recovered except for Mr. Grifon. After the crash many locals claimed to have found hundreds of skinned, half-eaten rabbit corpses hanging in the trees. While searching the area, the police found the body of a Marcus Wallster hanging under Bunny Man Bridge.

Supposedly the police located Douglas but as they were trying to arrest him at the overpass, he gets hit by a train. Legend still goes that many years after the Bunny Man's death and around Halloween, you can find dead rabbit bodies hanging from the overpass. Also a man in a bunny suit is seen from time to time.

Brian Conley states that this story is just that due to the fact that there has never been an insane asylum in Fairfax County and that Lorton Prison didn't come into existence until 1910. He also stated that during his research he found that according to court records there never was a Douglas Grifon or a Marcus Wallster.

Due to the popularity of The Bunny Man legend, Colchester Overpass is a popular tourist destination, especially around Halloween, for people involved in the paranormal, explorers and those that like urban legends. The police discourage this due to the fact it is dangerous to wander around on an active intersection of trains and cars.

Now back to the original photo that was mentioned at the beginning of this article....this was simply a screenshot from a 2011 film entitled "Bunny Man". 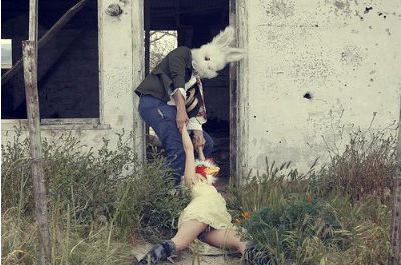 Here is the unedited photo


Short Documentary on The Bunny Man
This short documentary by Joshua Vaile that explores the legend of the Clifton Bunny Man and the Bunny Man Bridge.