On February 8th and 9th back in 1855 in the area of East and South Devon, England a phenomenon was seen in the snow and was tentatively called The Devil's Footprints. Hoof like prints were seen in the snow and covered a distance of approximately 60 miles. (Up to 100 miles depending on who was telling the story) The prints appeared to be cloven hooves and people thought they were made by Satan Himself. The prints were measured out to be 4 inches long, 3 inches wide and approximately 8-16 inches apart in a single file line. About 30 locations were reported to have these mysterious footprints in their area. The tracks traveled over houses, lakes and other obstacles that were in its way. The footprints were found on the tops of roofs and led up to and exited from pipes that were small as 4 inches in diameter. This fact calls into question the size of whatever caused the footprints.

Pulled from a news report:
"It appears on Thursday night last, there was a very heavy snowfall in the neighbourhood of Exeter and the South of Devon. On the following morning the inhabitants of the above towns were surprised at discovering the footmarks of some strange and mysterious animal endowed with the power of ubiquity, as the footprints were to be seen in all kinds of unaccountable places – on the tops of houses and narrow walls, in gardens and court-yards, enclosed by high walls and pailings, as well in open fields." 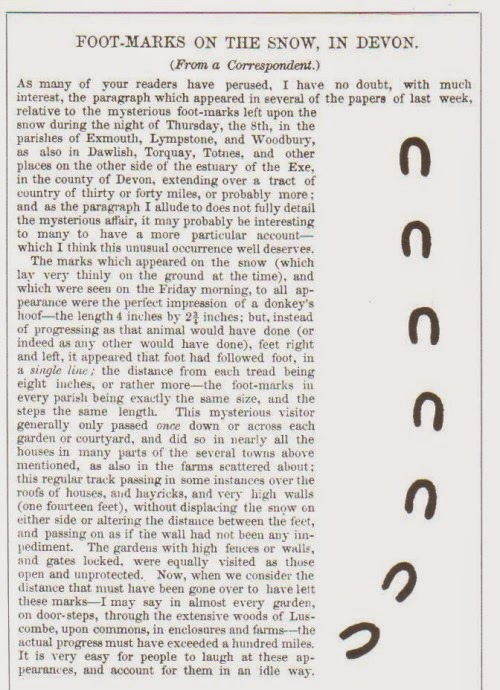 As with most evidence dealing with ghosts or creatures of cryptozoology there is very little concrete evidence, also the time frame (the 1800's) cameras and video cameras were not in use so photographs are very rare and video nonexistent. An article in the Transactions of the Devonshire Association asked for more information concerning this event back in 1950. During research, Reverend H. T. Ellacombe's, the vicar of Clyst St George, papers were found along with letters from Reverend G. M. Musgrove marked "not for publication" for The Illustrated London News which contained drawings of the footprints. In 1994 Mike Dash collected the source material and compiled them for Fortean Studies into a paper called "The Devil's Hoofmarks: Source Material on the Great Devon Mystery of 1855". (Which can be found here for a free PDF download:
THE DEVIL'S HOOFMARKS)

There have been many theories over the years as to what may have caused The Devil's Footprints. Some reports state that the footprints extended over 100 Miles, which would have been impossible for 1 person to hoax this in one day. According to Mike Dash In his Fortean Studies article, he concluded that there was no one source for the "hoof marks": some of the tracks were probably hoaxes, some were made by "common quadrupeds" such as donkeys and ponies, and some by wood mice . He admitted, though, that these cannot explain all the reported marks and "the mystery remains". 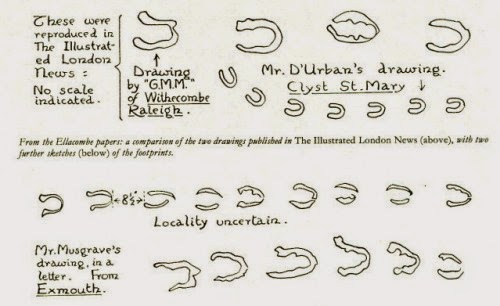 According to Author Geoffrey Household, he suggests that the Devonport Dockyard may have accidental released an experimental balloon and he trailing mooring ropes could have caused the prints. A man who worked at Devonport, his grandson, Major Carter claimed the incident was quieted due to the fact that some buildings and properties were damaged in the process. The shape of the prints could be explained away with the balloon theory but could it have traveled in this random zigzagged pattern without getting caught on the various obstacles? In other theories Mike Dash suggested that at least some of the prints, including some of those found on rooftops, could have been made by hopping rodents such as wood mice. The print left behind after a mouse leaps resembles that of a cloven animal, due to the motions of its limbs when it jumps. Dash stated that the theory that the Devon prints were made by rodents was originally proposed as long ago as March 1855, in The Illustrated London News. 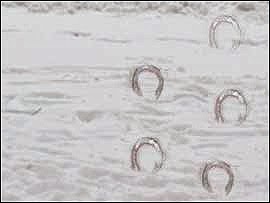 Rev. G. M. Musgrave wrote wrote a letter to the Illustrated London News: "In the course of a few days a report was circulated that a couple of kangaroos escaped from a private menagerie (Mr. Fische's, I believe) at Sidmouth." It seems, though, that nobody ascertained whether the kangaroos had escaped, nor how they could have crossed the Exe estuary, and Musgrave himself said that he only came up with the story to distract his parishioners' concerns about a visit from the devil:

I found a very apt opportunity to mention the name of kangaroo, in allusion to the report then current. I certainly did not pin my faith to that version of the mystery ... but the state of the public mind of the villagers ... dreading to go out after sunset ... under the conviction that this was the Devil's work ... rendered it very desirable that a turn should be given to such a degraded and vitiated notion ... and I was thankful that a kangaroo ... [served] to disperse ideas so derogatory...
—Rev G. M. Musgrove: letter to The Illustrated London News, 3 March 1855.

In the summer of 1855, a 'Professor Owen' put forward the theory that the footprints were from a badger, arguing the animal was 'the only plantigrade quadruped we have in this island' and it 'leaves a footprint larger than would be supposed from its size'. The number of footprints, he suggested, were because 'it is improbable that one badger only should have been awake and hungry' and added that the animal was 'a stealthy prowler and most active and enduring in search of food'.

Another theory which is the most likely cause is mass hysteria, in the 1800's, before the internet, tv and radio people entertained themselves with tall tales and made up stories. The mixture of real animal tracks, the unknown and a vivid imagination could very well explain this incident.


(Chris Chaos is a long time resident of South Jersey who once again resides in and writes from Gloucester City, New Jersey. He is a filmmaker, a business owner, writer, urban explorer and investigator of the odd and weird, a proud parent, happily taken and a connoisseur
of hot wings. Chris can be reached at AxisVideo@aol.com)
Posted by Chris Chaos at 9:24 AM