A Speculative Look at the Jersey Devil's Traits and Diet


A Speculative Look at the Jersey Devil's Traits and Diet:

The Jersey Devil is a fascinating cryptoid with a descriptive appearance that is as varied as the sightings reported. What follows are the most common traits that are attributed to the Jersey Devil:

The most recognizable image of the Jersey Devil

A HORSE LIKE FACE: Based on this varied descriptions, the Jersey Devil's face could resemble a deer, horse, kangaroo, moose or a bat, all of which are land mammals that mankind has been familiar with for many centuries. Minus the Hammerhead Bat, all the mentioned animals are on the larger sized and also eat fruits or various kinds of plants.

If you compare the face/head of a horse, you can see how it is very similar to the most common portrayal of the Jersey Devil. 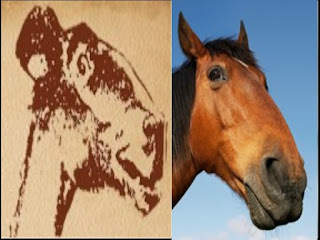 HORNS: Many animals have horns, rams, deer, goats, lizards (and dinosaurs) and ...of course the Devil Himself. According to Wikipedia:
"A horn is a pointed projection of skin on the head of various animals consisting of a covering of keratin and other proteins surrounding a core of live bone. True horns are found mainly among the ruminant artiodactyls, in the families Antilocapridae (pronghorn) and Bovidae (cattle, goats, antelope etc.)" The type of animals that possess horns crosses out of the mammal breed of animal and into the reptile kingdom. (Wikipedia, 2017) 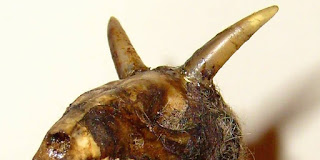 TALON CLAWS: Usually the animals that posses talons are the various birds of prey (such as a buzzard, eagle, falcon, hawk, or owl), which are used when hunting for food. There have been limited reports that the Jersey Devil attacked a canine and also various chicken coops on farms.

The talons of the Jersey Devil

BAT LIKE WINGS: Of course, bats have "bat like wings", but birds also have wings with feathers. Some birds have wings but are too heavy and large to fly, such as an ostrich. It would be interesting to see something as large (4-8 feet tall) as the Jersey Devil flying. 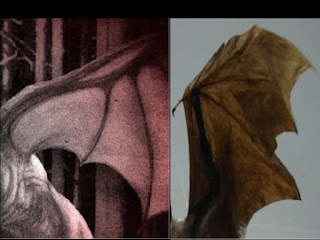 Jersey Devil wings compared to those of a bat

CLOVEN HOOVES: Mammals that posses cloven hooves are cattle, deer, goats, and sheep. Of course the cloven hoof is more of a reference to the Devil Himself when regarding the Jersey Devil. Interesting enough some of the supposed footprints left behind by the Jersey Devil were actually either 3 toed (trifed or Drake's Feet) or horseshoe shaped. 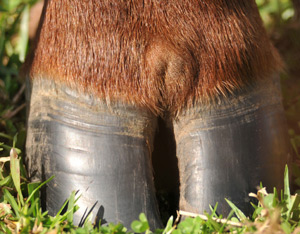 As pointed out, the Jersey Devil has attributes of a variety of species of animals. For the most part, it has been depicted as a mixture of common animals native to modern New Jersey (or at least the US) but then also has a few attributes not very likely in this realm of reality or time period.

Now we will take a look at the diets of a few of the animals that the Jersey Devil shares traits with. 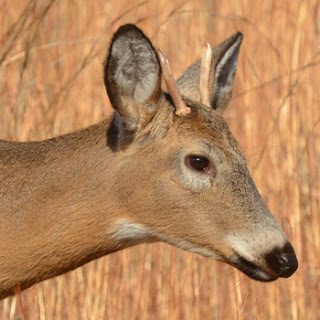 DEER: The season and the habitat that a deer lives in dictates a deer's diet. In the spring and summer it will eat green plants and in the fall corn, acorns and various nuts. It will eat buds and twigs in the winter months. Deer do feast on a wide variety of plant based foods and have a special ruminant (a four chambered) stomach that allows them to eat mushrooms and poison ivy. When in a farm setting a deer can eat hay, grass, white clover and corn. Against traditional acceptance of deer being entirely herbivorous, this is not truth, from time to time they have been known to feast upon nesting birds, field mice and trapped birds. 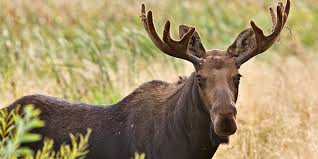 MOOSE: The Algonkian name (mons/moz) for the moose translates accurately to "twig eater". They lack teeth in the front upper jaw but still feast of leafy vegetation, willow, aspen, dogwood, red maple and in the winter months and balsam fir. In the summer months they prefer aquatic plants such as the water shield. 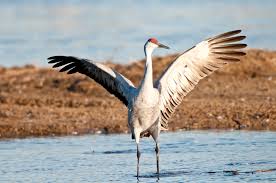 CRANE: Cranes feast on animals to plant matter. When on land they prefer seeds, leaves, nuts, berries and various insects. When in the water they feast upon roots, small fish and amphibians. 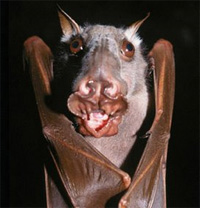 HAMMERHEAD BAT: The amazing thing is that the Hammerhead bat is not native to the United States but to Africa. They are frugivores and figs and fruits make up the bulk of their diet. 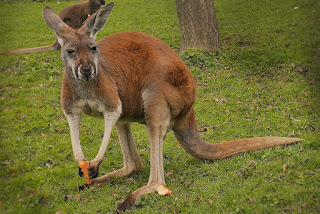 KANGAROO: As the same with the deer, kangaroos also have chambered stomachs. There are different species of kangaroos but they are all strict herbivores. Most breeds are grazers and eat a variety of grasses and particularly the red kangaroo eats a large amount of shrubs. 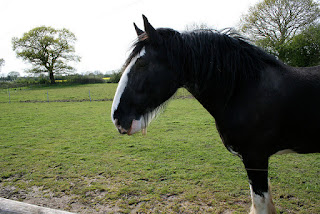 HORSE: Horses are known as "hindgut fermenters", which simply means they have only one stomach. Horses prefer to eat small amounts of food steadily throughout the day. Their diet consists mostly of grass, hay and some fruit such as carrots.


To follow along with the the film visit:
www.facebook.com/TheSearchForTheJerseyDevil


(Chris Chaos is a long time resident of South Jersey who once again resides in and writes from Gloucester City, New Jersey. He is a filmmaker, a business owner, writer, urban explorer and investigator of the odd and weird, a proud parent, happily taken and a connoisseur of hot wings. Chris can be reached at AxisVideo@aol.com)
Posted by Chris Chaos at 10:02 AM