On a small peninsula in Oaklyn there is a terrifying location with a dark history. According to the locals there have been several suicidal hangings at the tree present here.

The first time I visited this location was in the Spring of 2013, for a long time I wanted to go back for an update and this Fall (October 20th, 2014) afforded the perfect weather day to go back and see if there were any updates. So I gathered the gear and charged the cameras and headed off. Luckily for me, the location is only three miles from my house. 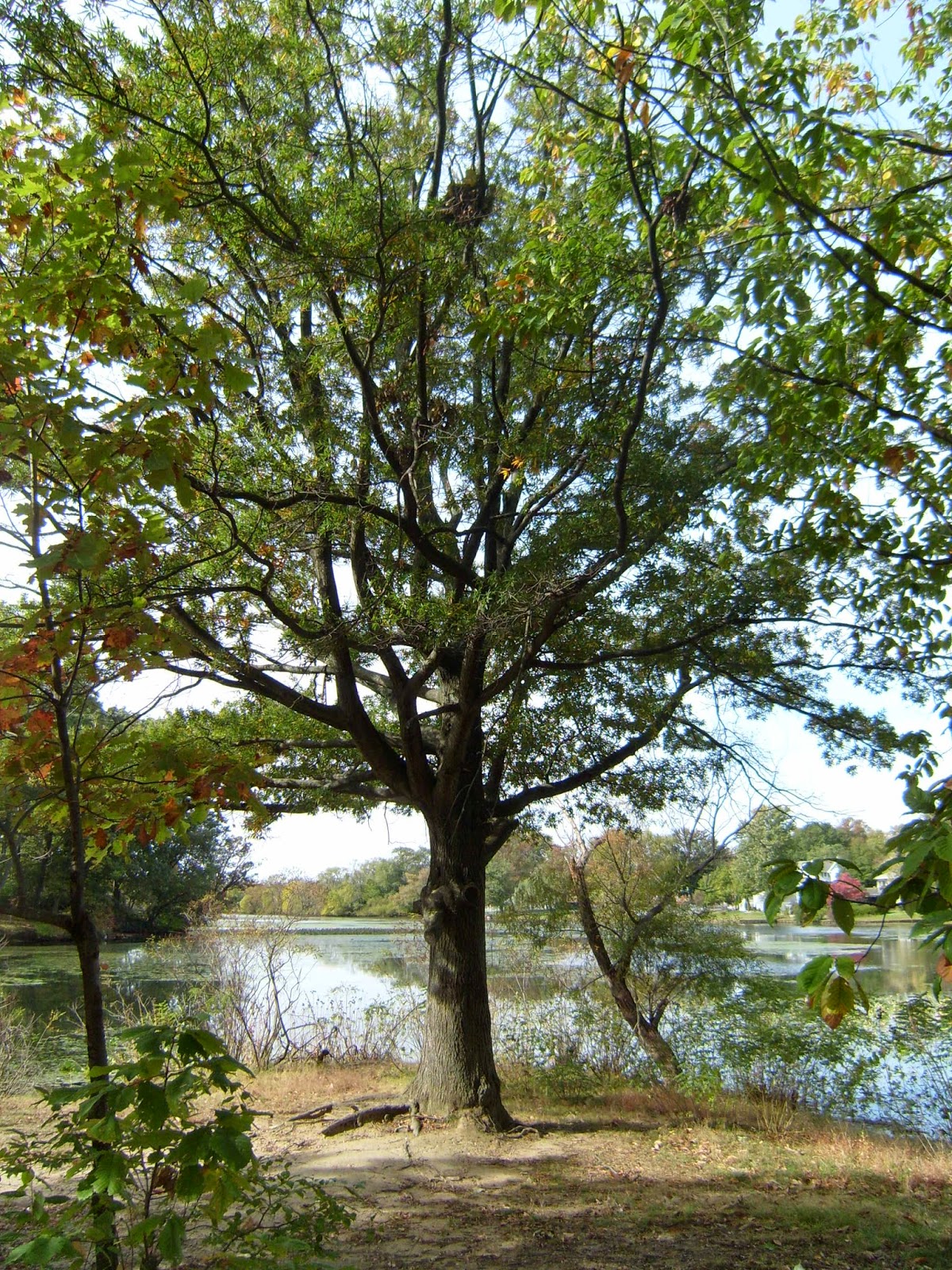 Since the first draft of the article went live back in 2013 this location raised more questions than it answered. I decided to put my nose to the books and conduct more research in an attempt to go deeper and find more information about this legendary location. Some of the residents living in the area were unaware of this dark history that this location welcomed, but then again many didn't know that a dinosaur (Reference: Hadrosaurus) was found in Haddonfield many years ago. Too many people are unaware of their surroundings and if it isn't presented blatantly in their face, then in their little world it did not exist or happen. Also when the original article hit a popular social media outlet, a member went ballistic after the word "Nazi" appeared in the headline. Of course they never bothered to read the article, just that word, "Nazi", set them off and they thought Neo-Nazis were invading. They panicked and started some unnecessary drama within the group before they were removed. 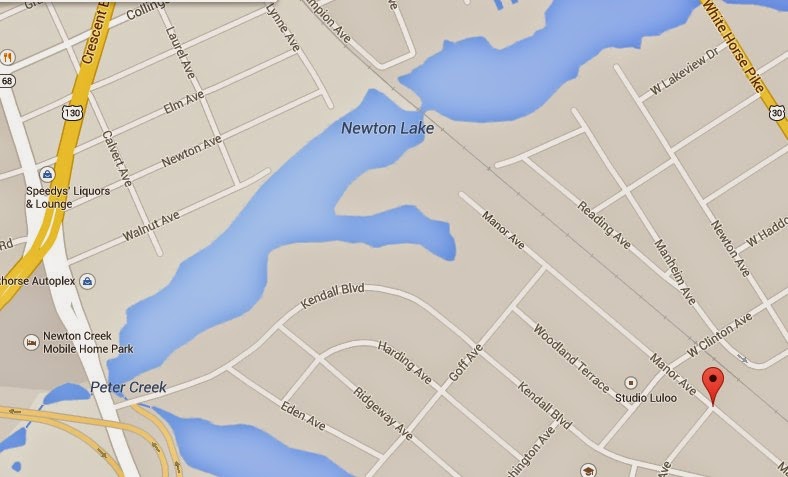 The peninsula dead center in the photo is the location of the Oaklyn Nazi Tree.
Image from Google Maps

This article was formed with research from the internet, old news microfilms reporting on the incidents and interviews with people from the area that follow and are aware of these kinds of events. 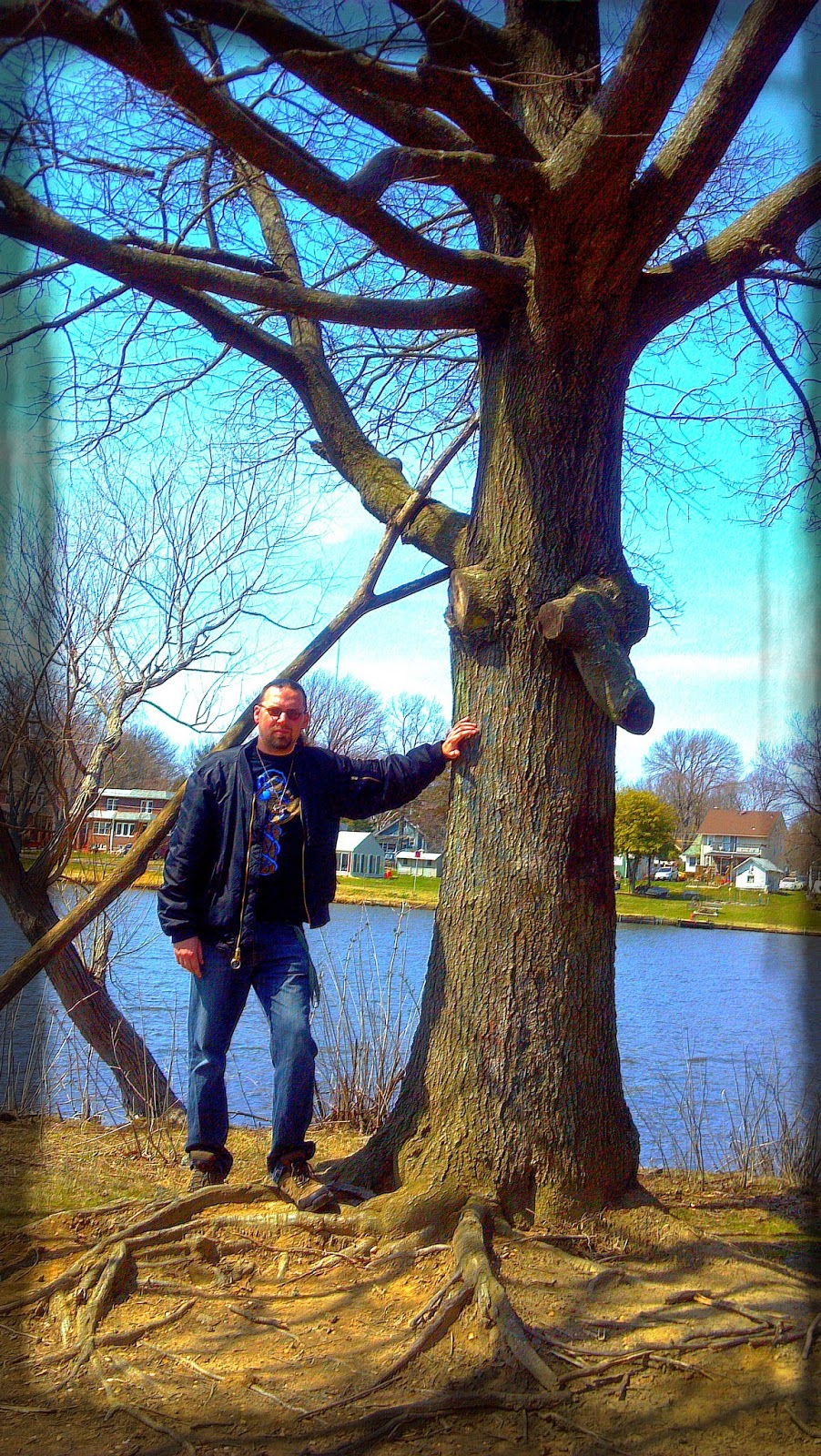 Where my hand is in the picture, is approximately
where  the Swastikas are repeatedly spray painted on.
At the time of my visit someone took it upon themselves
to remove the spray paint.

I pulled up and parked in the VFW parking lot which takes care of the park and has a nice garden and picnic bench set up in the center. It was a beautiful Autumn day and the leaves were falling, a nice 51 degrees, not too cold and not too hot, just perfect for a walk in a hoodie. While I was getting out of the car an older gentleman was making his way towards the benches with his newspaper ready to enjoy the day. 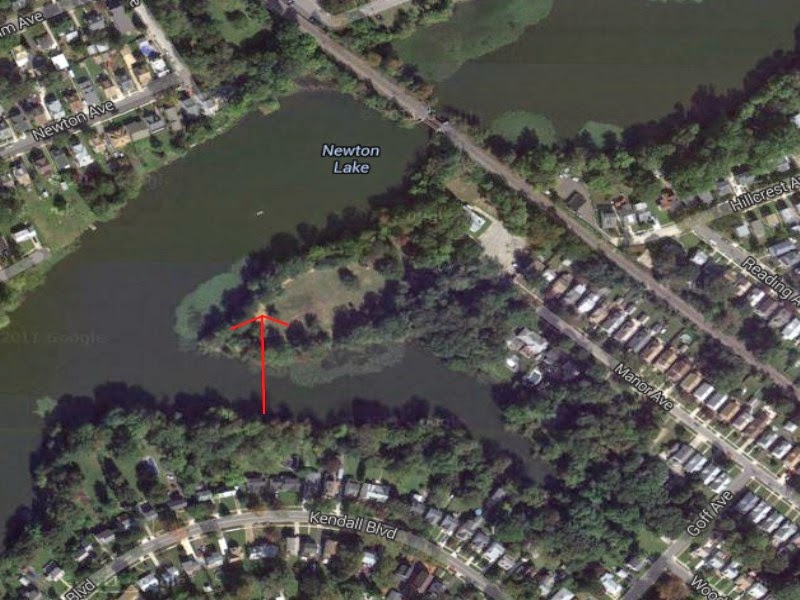 I entered the peninsula and walked along the waterline of Newton Lake which snakes its way to Newtons Creek and was a part of the infamous Haddon Lake before Blackhorse Pike, Route 130 and 76 were built. It is such a beautiful view and the water was a crisp blue hue. I made my way to the tree that claimed many lives, several of the "suicide" branches were cut in an attempt to stop the "curse" that many claim possesses this tree. The blue spray paint on the trunk of the tree was faded to a degree that you could not tell what it was. Many times a swastika was spray painted on the truck, hence how the Nazi part found it's way into the tree's name. 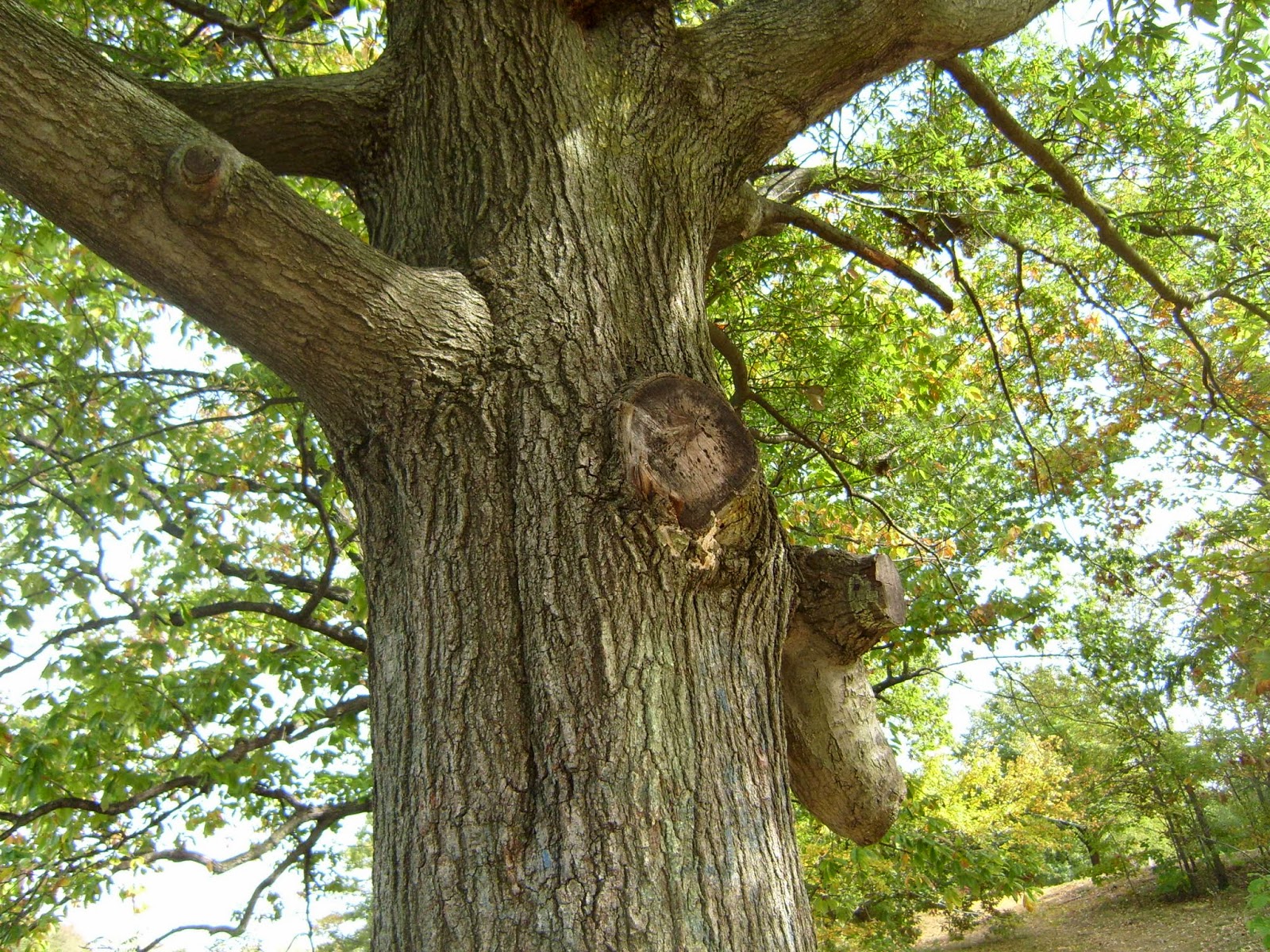 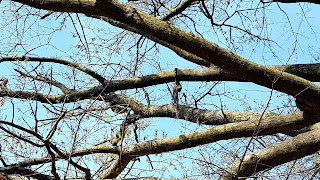 The rope is still visible

Ever since the first time that I visited this tree, one of the rope pieces was still visible on a branch that was cut down from a previous suicide. The location is still used as a party spot as I could see beer cans, blunt wrappers, condoms and what appeared to be a burnt hoodie on the ground. When teenagers come back to this isolated location they get a great view of the lake while they drink, get high and have sex. 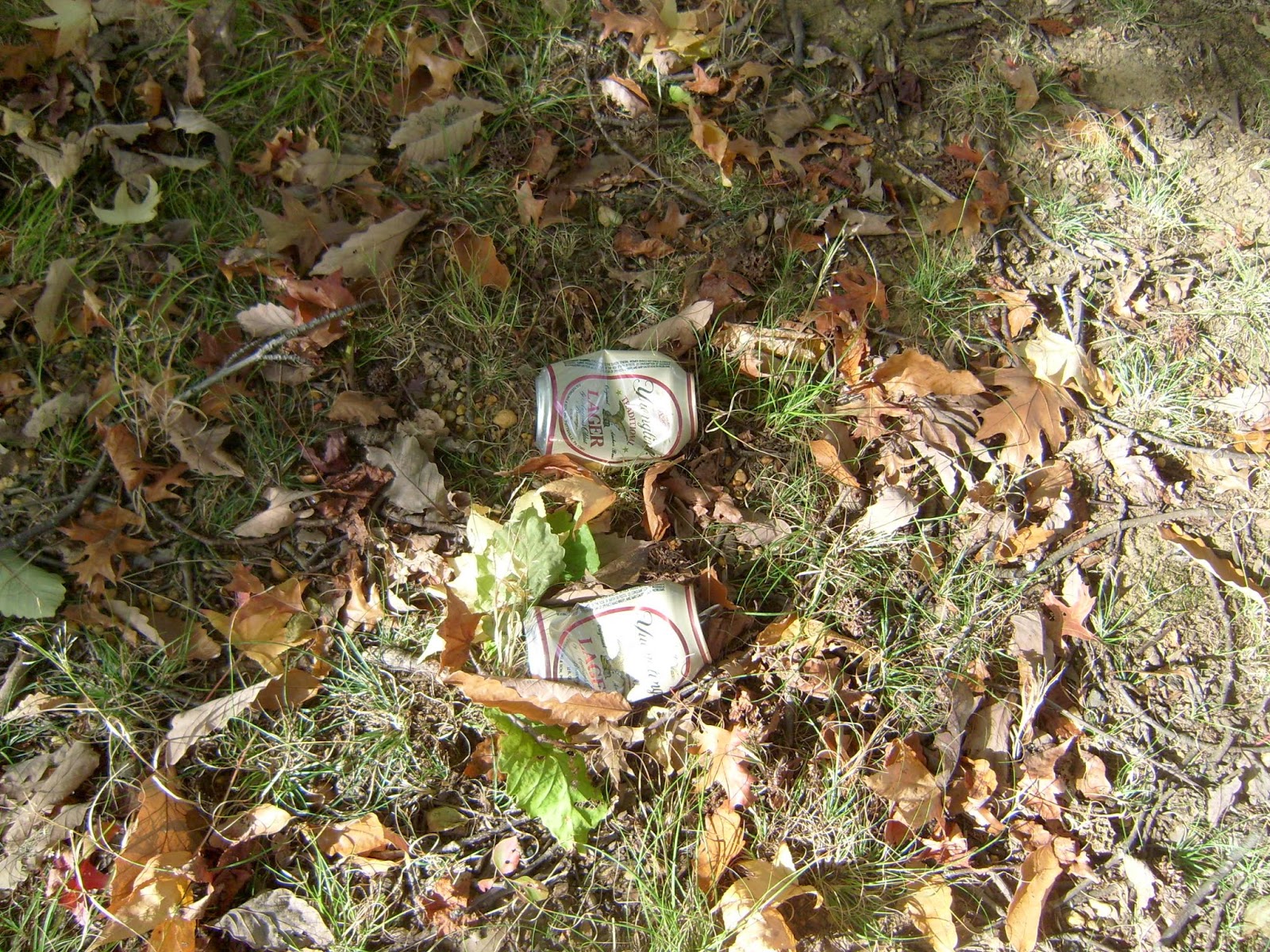 Some of the evidence of teens partying here 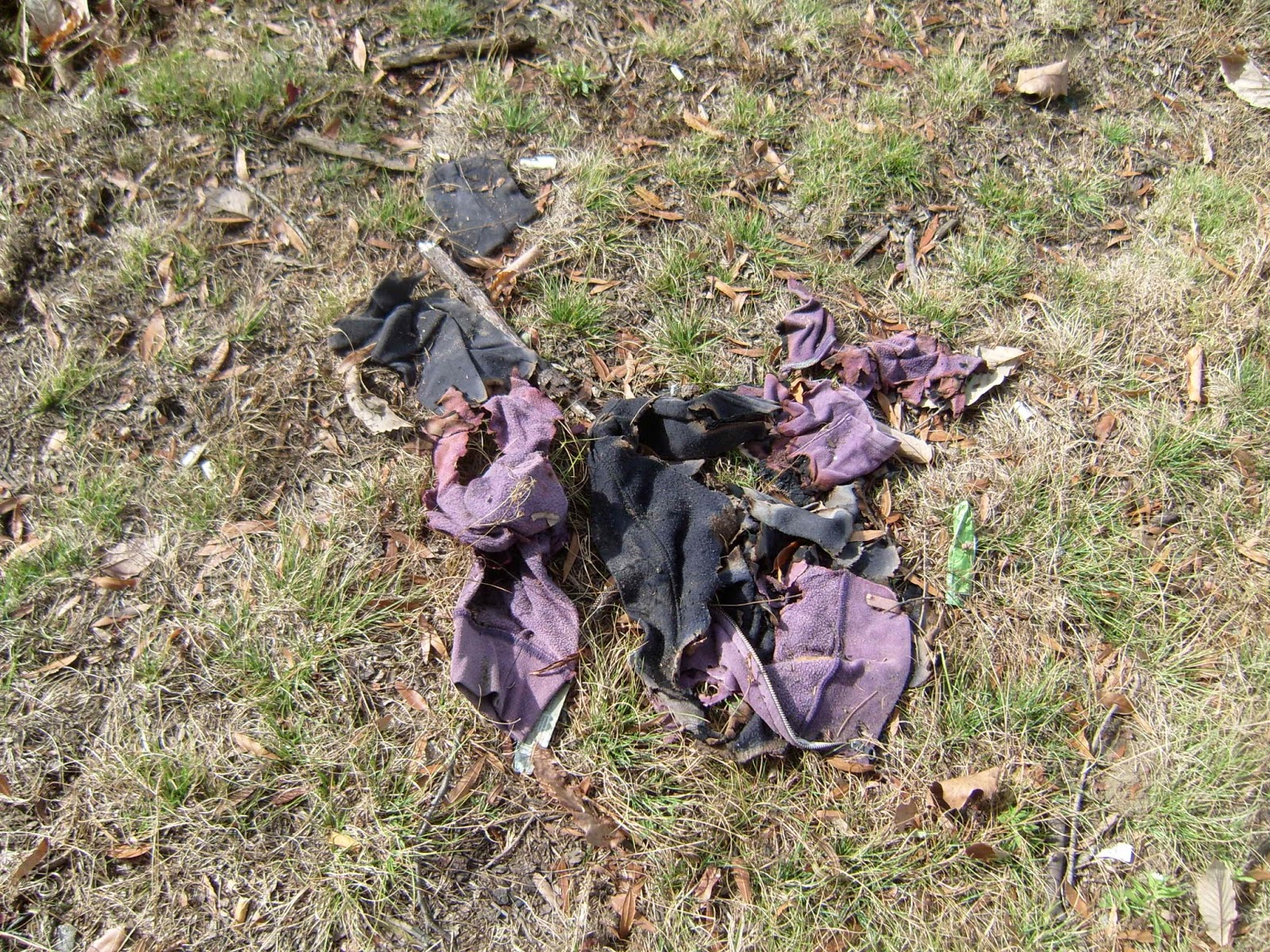 On the bank of the lake I found a segment of police caution tape, I wonder if that was left over from some prior or recent incident. I conducted an intense internet search and study of the last few weeks but I did not find anything related to the location. I even went as far as contacting Weird NJ to see if they had any additional information:

"Hey Chris,
We couldn't substantiate any reports either. Here is our report from issue #39 including the original letter.
Thanks for the photos!
Mark Sceurman"

I forwarded them some photos that I took along with requesting more info, but they didn't have anything new either.

This article mentions one of the hung men

A Video about the Oaklyn Suicide Tree

The original article that I wrote follows:

This ominous tree stands sturdy in Oaklyn NJ, on a small peninsula jutting out from a public park in this quiet suburb. This location is used by teens as a party spot and you can see beer cans and other evidence of partying on the ground near Newton Lake right off of Manor Ave. 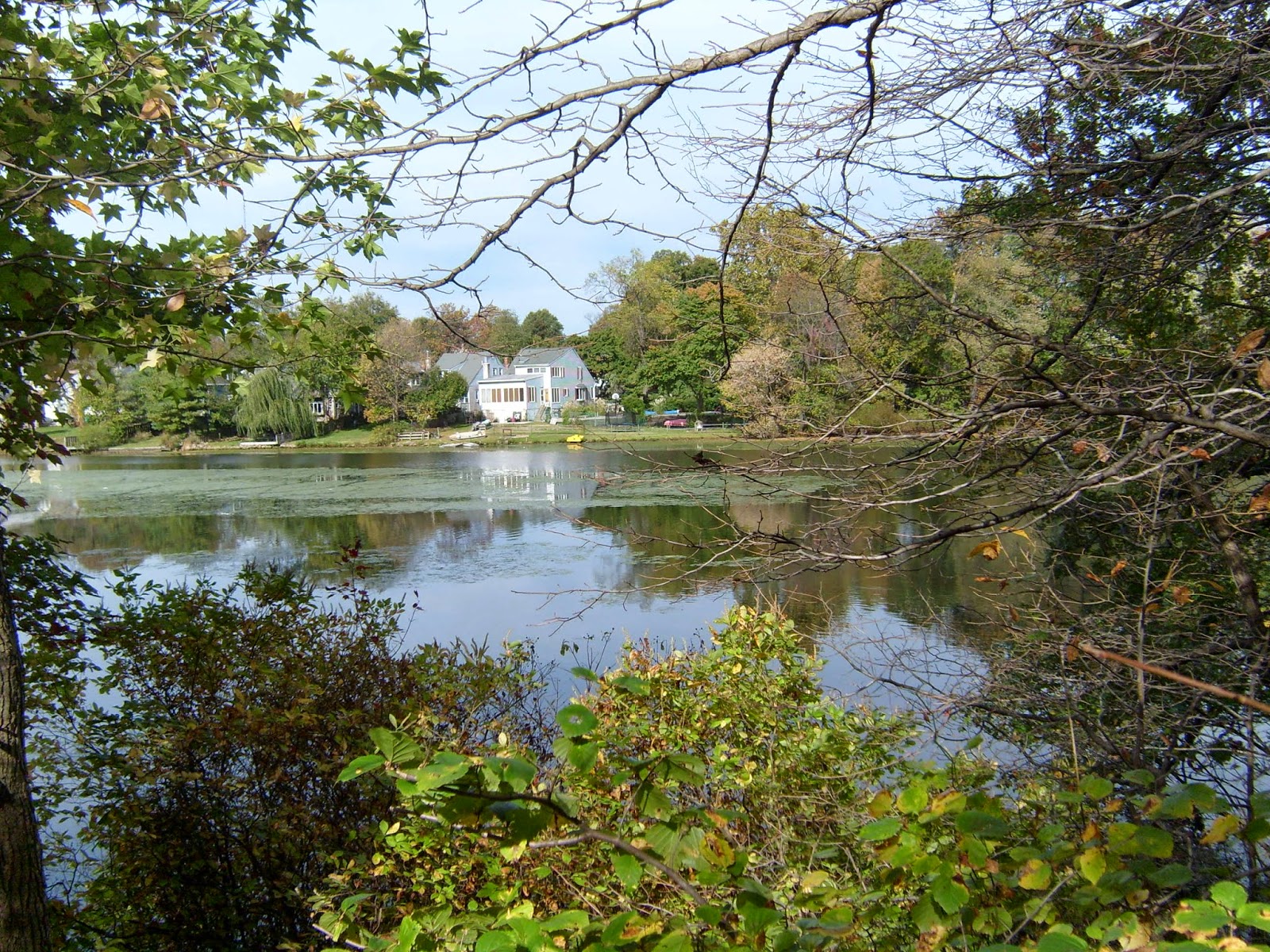 Stories range that anywhere between 6-12 people took their own lives by hanging themselves from this tree over the years. It was on a bright and sunny Sunday we went to visit the tree beside the lake. Upon inspection of the tree we noticed the swastika was stripped from the tree and appeared it might have been painted over several times and two of the main branches that were used in previous suicides were cut down to "prevent" future attempts. A rope that was used by the last person that hung themselves can still be seen on an upper branch after they cut the person down. This tree is also in close proximity to the notorious location known as Haddon Lake. Rumor also has it that on Manor ave someone committed suicide in one of the houses. (This I have not been able to confirm, it was based on several readers relating the same story to me.) 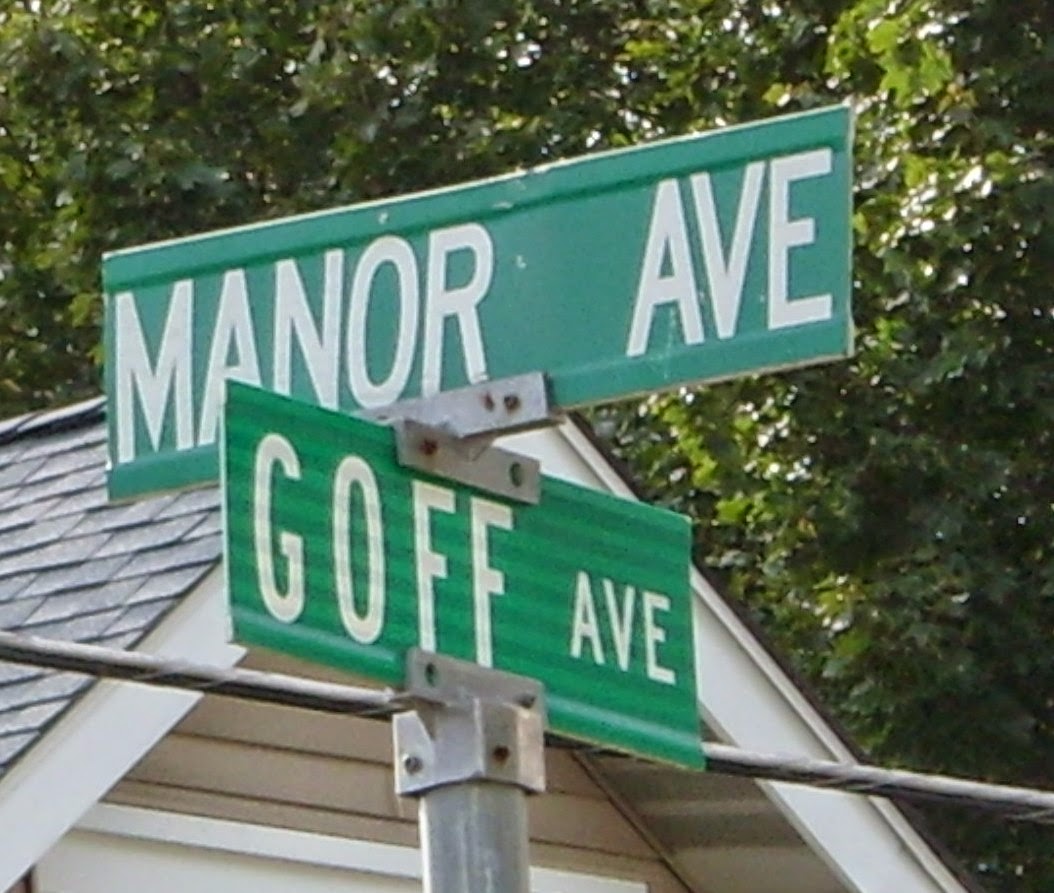 Mention of the tree

More photos and info can be found at:

(Chris Chaos is a long time resident of South Jersey who once again resides in and writes from Gloucester City, New Jersey. He is a filmmaker, a business owner, writer, urban explorer and investigator of the odd and weird, a proud parent, happily taken and a connoisseur of hot wings. Chris can be reached at AxisVideo@aol.com)
Posted by Chris Chaos at 7:58 AM