A CLOCKWORK ORANGE: The "Singing in the Rain" scene 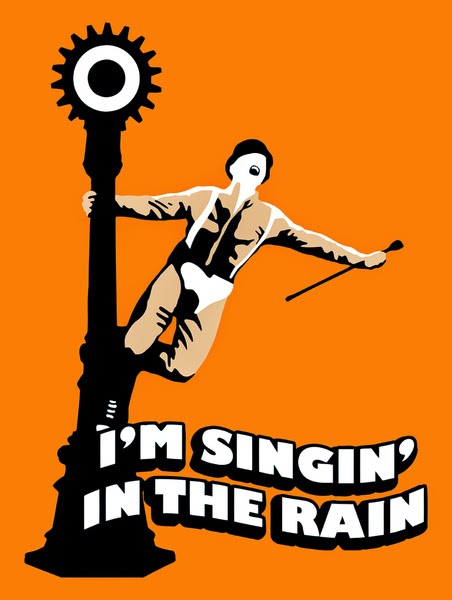 A Clockwork Orange is a film with a deep dark dystopian theme released back in 1971 by Stanley Kubrick. Anthony Burgess wrote the novella in 1962 and the film was adapted from the book. The time that this story takes place is in the distant British future and makes quite a few social comments on society and violence.

The film follows Alex committing crimes and then attempted rehabilitation via controversial psychological conditioning through a fictitious therapy called the Ludovico Technique. A Clockwork Orange is considered a landmark in the relaxation of control on violence in the cinema. 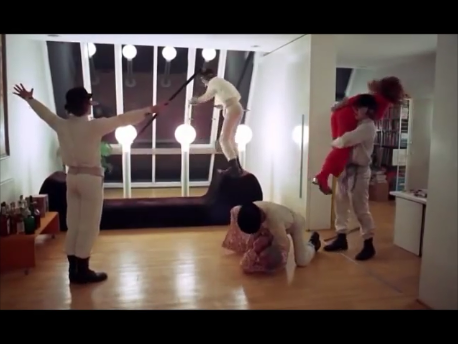 THE SINGIN' IN THE RAIN SCENE:
The scene starts with Alex and his Droogs racing down the dark street with a close up of his face and a narrative. The crew arrives at the house and jumps out. The house is calm and peaceful as the man writes on his typewriter and the wife is reading in her egg chair. As a way to get in the group claims there has been a "terrible accident" on a play of the couples empathy. Opening the door the crew grab the woman, gets loud, jumps around and Alex starts to sing the infamous song while hitting the woman. He then tapes up her mouth and then starts to kick the man. They start to wreck the place and then cut the woman's clothing to remove it, while Alex de-pants. "Viddy well, little brother, viddy well", states Alex then he proceeds to rape her and they force the man to watch. 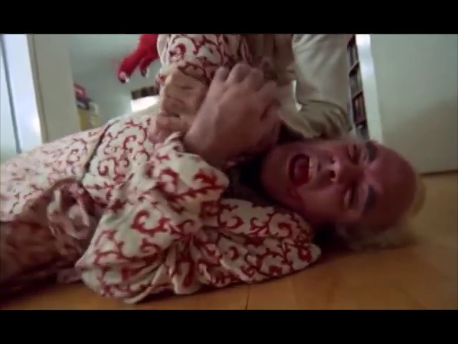 The moral question is "What is good?", how to stop the violence and a running lecture on free will. Aversion therapy (called the Ludovico Technique in the film) was used in an attempt to curb Alex's bad behavior. Kubrick said of the film"...A social satire dealing with the question of whether behavioural psychology and psychological conditioning are dangerous new weapons for a totalitarian government to use to impose vast controls on its citizens and turn them into little more than robots." (reference: Saturday Review, December 25, 1971) There seems to be a knowing and blatant disregard for the intention of the original song, but Alex makes it his own and causes pain to others.

The scene in A Clockwork Orange in which Alex and his crew con their way into the house and rape the woman has to be one of the most demented but memorable scenes of the film, it is the perfect combination of sexual prowess and malevolence. Gene Kelly, who sang the 1952 version of the song, was reportedly disgusted when it was used in the film and walked away from McDowell (who played Alex in the film) at a party. The use of this well known happy song in this dark film may be very ironic to most viewers, but it made an emotional impact in all that seen it. The mixture of the happily acapella sung song while a brutal act is occurring is enough to disturb most. Alex destroys what others love..the song and the man's wife. 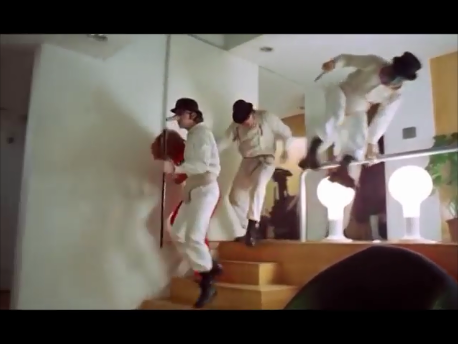 We often may wonder how and where Alex's crew got their start in committing the crimes that they participated in. What caused them to become this way? Also have people that viewed this film acted out in similar manners, in effect, becoming copycats of what they witnessed?

Kubrick did a most excellent job in capturing the chaos within the scene. In a society where the younger generations are out of control due to lack of parental control, junk culture is becoming commonplace, violence is desensitizing the masses, and we all seem to be enjoying the ride on the way down, this movie makes a bold statement..

“I was cured all right.” Alex DeLarge 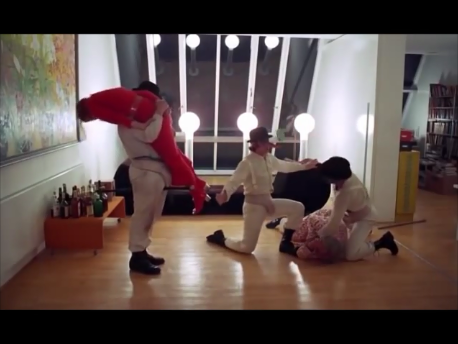 For more of Chris' writings, go here:
All Things Weird

(Chris Chaos is a long time resident of South Jersey who once again resides in and writes from Gloucester City, New Jersey. He is a filmmaker, a business owner, writer, urban explorer and investigator of the odd and weird, a proud parent, happily taken and a connoisseur of hot wings. Chris can be reached at AxisVideo@aol.com)
Posted by Chris Chaos at 9:02 AM