Was the Jersey Devil Finally Videotaped/Photographed? 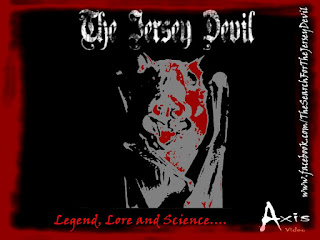 Out of all the cryptids from around the world, the Jersey Devil is the one with the least amount of video, photographs and physical evidence concerning him.

Anytime news hits involving the Jersey Devil my inbox and notifications go off like crazy, especially this time of year when the activity increases due to the proximity to Halloween. I have spent the last few years, from November of 2002 till now, researching, exploring and compiling information concerning the Jersey Devil and the results will be released on October 31st, 2015 in a book medium, "THE SEARCH FOR THE JERSEY DEVIL: Revisited" .

Today I received messages from multiple sources making me aware of the following two new updates to the Jersey Devil legend. One was from NJ.com and the other was from Weird NJ. 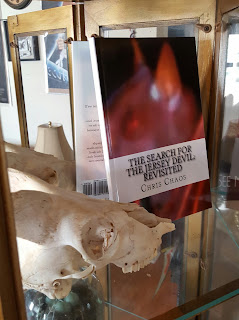 Cover of the book, "THE SEARCH FOR THE JERSEY DEVIL: Revisited"

On NJ.com's website [1], October 12th, 2015 it was reported that Dave Black of Little Egg Harbor spotted what he thought was the Jersey Devil. he snapped a few pictures but only one came out. Here is an excerpt from the story from NJ.com by Kelly Roncace:

".......Dave Black of Little Egg Harbor Township was driving home from his security guard job in Atlantic City when he saw what he thought was a llama running in and out of the trees lining the road.

"I was just driving past the golf course in Galloway on Route 9 and had to shake my head a few times when I thought I saw a llama," he wrote in his email.

What happened next is the bizarre part.

"If that wasn't enough, then it spread out leathery wings and flew off over the golf course."

Black said he grabbed his cell phone and snapped off a few photos, but only one came out.

The creature quickly disappeared, he said, and left Black wondering.

"Either my mind is playing tricks on me or I just saw the Jersey Devil," he wrote.

After his encounter, Black said he stared at the photo for an hour trying to come up with an explanation for the image he had captured, before deciding to share it with NJ.com and its readers.

"Thought I'd send it in for you to share," he wrote. "I'm not looking for anything in return, just thought someone else could maybe explain this in a more rational way."

Before I could write about his experience and print the photo, I had to be sure he was sincere. 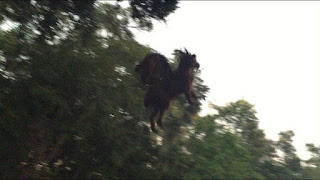 "Yes, I swear it's not Photoshopped or a staged thing," Black responded when I asked if he was willing to let me use his name and state that the photo he sent was not manipulated in any way. "People have said it's fake, but it's not. I'm honestly just looking for an explanation for what I saw."

Being a paranormal investigator, I'm very skeptical and need proof before I believe in anything that could be considered paranormal.

The photo, if it truly has not been messed with or wasn't set up, is quite...interesting.

You can clearly see wings on the creatures back and horns on its head. Its feet are cloven and the fur is dark brown.

And it's obviously off the ground.

I don't see any wires or string holding it up like a piñata.

However, what is it?

"The mind plays tricks on you," Black admitted. "A friend suggested that maybe it was an animal running and an owl grabbed it, the photo being a combination of them. That's still not my first instinct, but I don't know how to explain it otherwise."

His final statement on the incident was simply, "I think I saw a large, flying mammal about the size of a deer."

Weird NJ received a letter from one of their readers named Emily Martin, the following is an excerpt from the letter [2]:

“I realize this sounds crazy but I saw a red animal with a long neck and horns. I swear on my mother’s grave, this is not a joke. I pulled over to take a video and as I started filming it got on its hind legs and flew away. I am an middle school teacher but moonlight tutoring algebra for high school students. Was driving home from an appointment on Old Port Republic Rd in Leeds Point when I took this video. So excited, had to share with someone. I searched online and a few others have similar stories. Channel 12 posted a photo online of it.”

We are currently analyzing the above stories, photo and video and will have our opinion formed after a proper study has been taken.

You can purchase "THE SEARCH FOR THE JERSEY DEVIL: Revisited (book) and DVD on Amazon, at Barnes and Noble or through Axis Video. 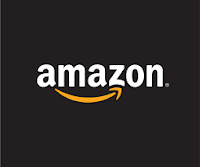 (Chris Chaos is a long time resident of South Jersey. He is a filmmaker, a business owner, writer, urban explorer and investigator of the odd and weird, a proud parent, happily taken and a connoisseur of hot wings. Chris can be reached at AxisVideo@aol.com)
Posted by Chris Chaos at 7:03 PM