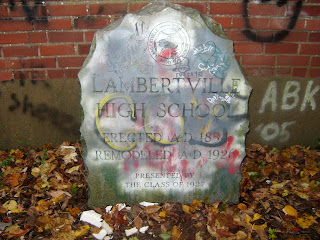 Out of all the locations that we have visited this one seemed to have the most mystery and hype behind it.

Lambertville High School was built in 1854 in Lambertville, New Jersey. A fire destroyed much of the school in 1926, but it was remodeled and rebuilt in 1927 and used until June 1959. Since then it has sat abandoned and vandalized ever since. During the 50's and 60's many "smaller" schools became obsolete and were replaced with regional schools to accommodate larger classes. After it closed as a school it sat unused for about 30 years until vandals set fire to it destroying much of the property. 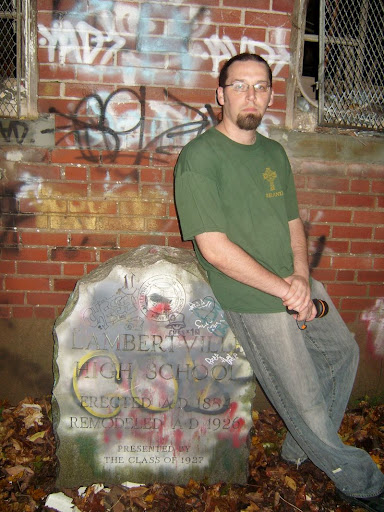 There are many stories of hauntings and paranormal occurrences at this location,
but to date no recorded murders or anything of the sort occurred at Lambertville.
Although neither were true some of the tales and legends revolved around students dying in the fire or the Buckeye football player that died on the field. Many visitors to the location also added to the mystic by writing random messages on the famous blackboard and stating the ghosts wrote them.

When we visited this location it was in bad shape, debris was everywhere. The most disturbing thing we saw was the abandoned car seat (which reminded us of the one at Boody Mill Road) in the woods several feet from the building itself. The stone sign for the school was still near the door where we stopped to pose for pics. Graffiti littered the walls of the school and evidence of vandals and partying were in every room. We feared for the integrity of the structure and hoped that we didn't fall through the crumbling floors. On the roof there were trees actually growing out of the floors. 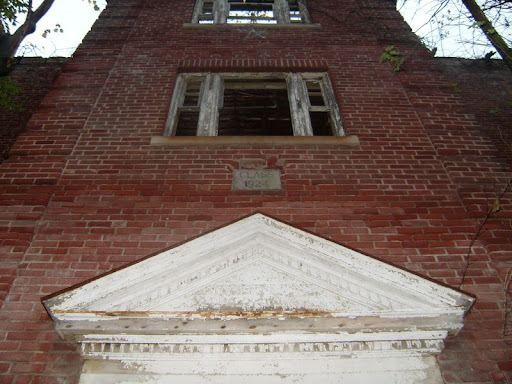 UPDATE: In the Fall of 2012, the High School was demolished.

The structure was knocked down in one day, "which shows you how bad it was," city construction official Ken Rogers said today.

"It's really good timing," said Mayor David DelVecchio. "Now we don't have to worry about it for Halloween."

Officials state that the hill will be regraded and soil conservation will be required to keep the ground stable. No word of what may occupy the land in the future.

(Chris Chaos is a long time resident of South Jersey who once again resides in and writes from Gloucester City, New Jersey. He is a filmmaker, a business owner, writer, urban explorer and investigator of the odd and weird, a proud parent, happily taken and a connoisseur of hot wings. Chris can be reached at AxisVideo@aol.com)
Posted by Chris Chaos at 9:16 AM