The Search for the Jersey Devil: Hammerhead Bat Theory If you look at pictures for the hammerhead bat that is native to Africa, you will see that its face does resemble traditional depictions of the Jersey Devil. The sizes are a bit off given that some people stated that the Jersey Devil was between 6-8 feet tall and the bat has a wing span of 27-38 inches and a total length of 7.7-11.2 inches, weighing 8-15.9 ounces and the females are slightly smaller.

One theory could be that someone in the area was keeping a Hammerhead bat as a pet and it escaped. But once again, the sizes between the Hammerhead Bat and the Jersey Devil are way off. The comparison between the two animals is not to far off since throughout time many residents of New Jersey have kept exotic animals as pets. There also have been quite a few zoos, circuses and what not associated with the area.

As far as the face of the Hammerhead Bat it appears to be a better explanation of what people of the Pine Barrens have been seeing as opposed to the Sandhill Crane. But the one up that the Crane has over the bat is that the Crane is native to New Jersey and the bat is native to Africa.
The Sandhill Crane is a herbivore, but since the Jersey Devil has been accused of stealing and attacking livestock and chickens he is thought of as a carnivore. Also the Crane stands about 40-48 inches (3-4 feet) tall and the Jersey Devil is about 72-96 inches (6-8 feet). It is noted that the crane has a loud screech and legend has it, that the Jersey Devil does too. 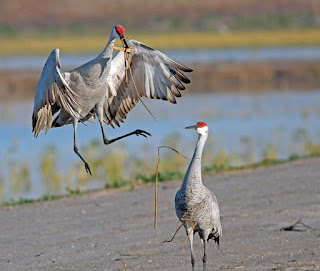 The Sandhill Crane in flight and standing

Many skeptics and those people looking for a rational explanation as to what people have been seeing for several hundreds years in the New Jersey Pine Barrens have searched desperately for an answer. One of the most common and logical given answers has been the Sandhill Crane.

(Chris Chaos is a long time resident of South Jersey who once again resides in and writes from Gloucester City, New Jersey.  He is a filmmaker, a business owner, writer, urban explorer and investigator of the odd and weird, has a black cat named Jynx, 2 rats named Phantom and Opera, a proud parent, happily taken and a connoisseur of hot wings. Chris can be reached at AxisVideo@aol.com)