Indian Cabin Road has all the attributes that legendary roads in New Jersey are made of, abandoned buildings, a church, "Pineys" with shotguns chasing you in pickup trucks, a murderer and a graveyard. This was enough to make us to want to visit this location to see what it is all about. Even armed with a GPS and maps this road was very difficult to find in the thick and twisted Pine Barrens.

Our 1st attempt put us in a school parking lot and it looked like we could cut through the woods on foot to get to the road, but this area was flooded out, so we had to leave, get back in the car and go all the way around several roads to get to the location. There are actually a few sections to this road and the one we attempted to get at was in a tiny residential neighborhood. The confusing part is there is a West Indian Cabin Road also. It was brought to my attention that this road used to be unpaved and sometime in recent years it has been paved. Looking for the West side we navigated through a community with very German sounding names such as Heidelberg, Goethe and Hamburg. Many of the stories that are connected to Indian Cabin Road sound like a repeat associated with other roads and locations like the stories of "Pineys" in pickup trucks chasing after you. But the story that got us interested was of the CRUKKER who supposedly lives along this road and is a rapist/child molester. Legend has it that late at night you can hear the cries of the children. It has also been stated that there is a tree made out of soda bottles and candy that he tries to lure children with.
When we finally did reach the road it was extremely dark outside and there was nowhere to park the car since we were on other people’s property. We did explore a bit and hung around to see if this mysterious man would show himself but we didn't see anyone except a person that lived in one of the local houses walking their dog and another person putting their trash out to the curb. In the future we do plan to go back in the daylight and see if any of the legends hold true. Along this road there is an old abandoned boys camp, a house with a shrine and grave of a Ms. Shaler which reads:


“Sacred
To The Memory Of
Mrs. Sibbel Shaler
Consort of the late Timothy Shaler
Who departed this life
On the 2nd Day of April 1785
In the 34th year of her age
And whose mortal remains repose
Here together with those of three
Of her infant children“ 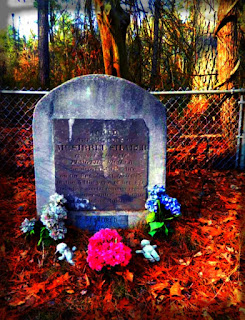