Where is a spirit or ghost most likely to haunt? The location where in human form they passed away, or do they linger near where the body is kept or entombed? There are many opinions and misconceptions on this question.

Many say that a ghost haunts the area/home/building of where the person passed away, especially when it comes to a violent death or suicide. They say that a strong bond is formed with a particular location and that is why the spirit may linger in these locations. So going with that theory it would appear that a graveyard would be incredibly peaceful and free from haunting specters. Since almost no one dies in an actual cemetery or graveyard you would think these locations to be spirit free. A cemetery is simply just a location to keep and immortalize loved ones. Their bodies, memories or ashes are kept at this location so family and friends have a place to go to and remember the dearly departed in a respectful manner. A place to come to and mourn and remember if you will. It seems that most locations that people state are haunted are long abandoned hospitals, prisons, mental asylums or houses. Which would make sense since these are also locations that the average person would fear, the unknown. The dark basement, under the bed, in the attic, these are many locations that the average person is afraid to go in alone or when it is dark, when in reality they are no more fearsome than any other location in your house. They are just rooms that you do not venture into all that often. Humans fear the unknown the most. These fears of the unknown or locations that are dark are fears left over from our primitive states, they are natural fears but have little to no rational use in the modern age. Although there is a small chance that a murderer might be hiding in your basement but other than that, what is there to logically fear in your attic or basement?
Another popular theory would be that the ghost/spirit stays close to the body that it inhabited. Going with that, then houses would be minimally  haunted and graveyards would be extremely haunted and loaded with spirit activity. Following this train of thought then what would happen when a body is cremated? Would the spirit dissipate? Would it disintegrate? Would it get watered down and scatter with the ashes? Would the spirit untether itself and roam free?

Reincarnation is a wonderfully hopeful concept that was man made and created to put a positive spin on the "afterlife". In some angles it holds true and could be based on science. The circle of life: organism dies, nutrients and meat get consumed by other animals, plants and insects; thus providing source of life for other walks of life. In some respect you do live on..through another animal or life form. But the aspect of a soul leaving one body and entering another upon death just carries no scientific weight or logic.
Mankind's version of reincarnation is that when a person dies they magically are reborn in infant form randomly somewhere else on this Earth. But is this how it works? When you die, is there a soul that leaves the body? Some say that you lose 21 grams in weight when you die and they attribute this to the weight of your soul. Or does the electrical energy that was once "you" transfer over to some other non-intelligible form of Nature such as wind, light, static electricity etc? 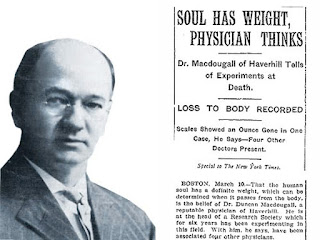 Dr. Duncan MacDougall ran several tests in the past on which he measured the weight of a body pre and post death, the results did vary but all bodies averaged out to weigh 21 grams less once death was confirmed.

(Chris Chaos is a long time resident of South Jersey who once again resides in and writes from Gloucester City, New Jersey. He is a filmmaker, a business owner, writer, urban explorer and investigator of the odd and weird, a proud parent, happily taken and a connoisseur of hot wings. Chris can be reached at AxisVideo@aol.com)
Posted by Chris Chaos at 8:58 AM