In January 1909 the Jersey Devil was revived by a hoax and displayed in a private museum (9th and Arch Museum) in Philadelphia, the creature was actually a kangaroo outfitted with fake wings affixed by a harness and painted with green stripes. To make it leap at spectators when the curtain was drawn, a boy hidden at the rear of the cage prodded the unfortunate animal with a stick and a nail attached to it. The showman's name was Jacob Hope (or Norman Jefferies RIP May 25, 1933) and he claimed JD was an Australian Vampire and offered a reward for its capture. 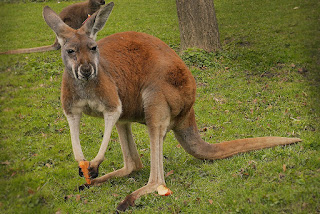 In the 1800's and early 1900's many residents of New Jersey did keep exotic animals as pets and traveling circuses were the norm. So a kangaroo being either kept as a pet (or at a circus) could have possibly escaped and was spotted in the Pine Barrens mistaken for the Jersey Devil.  I think you could look at a kangaroo in the dark woods and see a deer due to the very similar facial structure and body type. In modern times, it is "illegal" to have a kangaroo in the state of NJ but you can obtain an exotic pet license and a permit for the kangaroo. 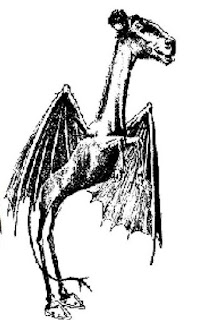