Within this body of water, a cold hand may reach up to greet you. Is it that of the Jersey Devil?

Since at least the 1930's the Jersey Devil has been linked to the Blue Hole. It is rumored to be his favorite watering hole and will pull under swimmers to their icy deaths. Bernard Anlage from Kramer Hill Camden provided Mr. Henry Charlton Beck with a wealth of knowledge concerning the Blue Hole located in Winslow Township, NJ. Located near Inskips Road and Piney Hollow Road it was a fearful place where the adults, including the hermit Joe Dixon, always warned their children to stay away from due to the supposed Devil that called this place home. Dave Dixon, Joe's brother fondly recalled that many of his boyhood friends had to be retrieved and revived after being pulled from the Blue Hole. This occurred after they, "..dared the hoodoo and sought to swim across."

Inskip Brick was the name of the man who ran the sawmill along the Blue Hole. Dave went on to state, "My father and others warned me and the boys I went around with not to hang around the bottomless pit. They used to say things about cramps but they meant more than that. It was as if there was something about that pool that had them scared, something they did not want to understand, something that gave them the shakes.

Dave went on to relate a tale that a man by the name of John Inskips Brown laughed at the people's warnings and swam out to the middle of the Blue Hole. He then let out a shout and went under the icy water for the last time, the locals fished John out and pulled him to the shore. John stated that the devil reached up and got him from deep in the pool.


Charles Downs from Williamstown stated, "The legends clinging to the hole have been handed down for years. Some Boy Scouts came here a few years ago and cleaned it out-this bridge is new as there are concrete pipes under the sluice. They managed to give the pool a free outlet for a time but now, as you can see, the flow is sluggish and the Blue Hole as sinister as ever."

Bernard Anlage went on to say, "..there used to be a big pike that hung around down there on the other side for many years. He would never even look at the bait on my hooks when I used to fish here. They tell me he got caught two years ago" (Beck, 1937).
(Note that the average life span of a Pike is 7 years) 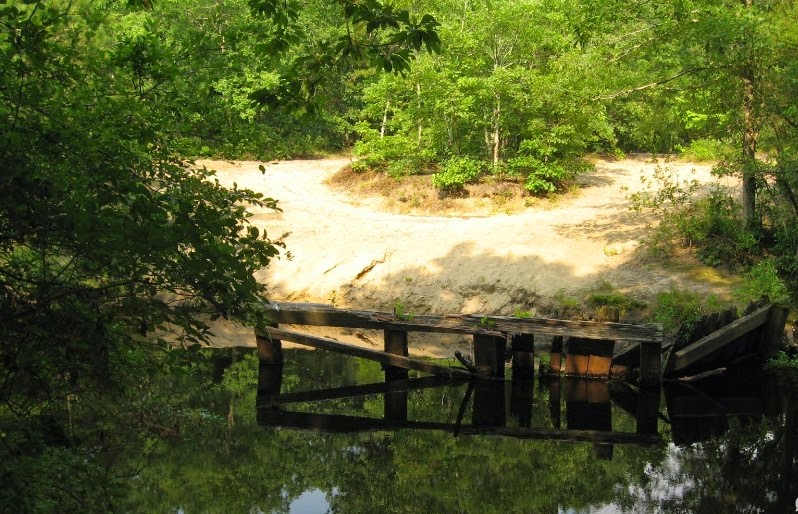 The remains of the bridge
Located within the Pine Barrens of Winslow Township, New Jersey the Blue Hole (also referred to as The Devil's Puddle) is a mysterious body of water that remains cold (averages 50-58 degrees even in the summer months) no matter what time of the year and possibly houses the Jersey Devil himself. The blue water itself is very odd since most of the surrounding lakes are brown in color due to the bog iron and cedar water. The Blue Hole is possibly fed by groundwater as opposed to the surrounding streams.
Blue Hole Video


The Blue Hole, alleged to be bottomless, is approx 70 feet across, almost perfectly round, there are no signs of life within the lake and it is always cold to the touch. Back in the 1930's it was a popular watering hole for the locals and there was a wooden bridge over the Great Egg Harbor River that was washed away in the 1940's or 1960's (depending on who is telling the story) by a storm. 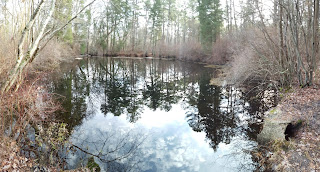 True danger does lurk among the warnings of the Jersey Devil. The hole has become abandoned to the locals due to the fears that it is bottomless, the currents or the Jersey Devil will pull you down to your death. But there are several similar holes in the area and is plagued by quicksand due to the high water table levels in the area. Rumored to be bottomless, others state that the bottom is made up of "sugar sand" and has claimed many victims. In its isolation, when you stand near the hole, it is eerily quiet and no sounds can be heard at all. Except for BLAST!! shots fired from the nearby shooting range. The surface of this watery hole is insanely still. 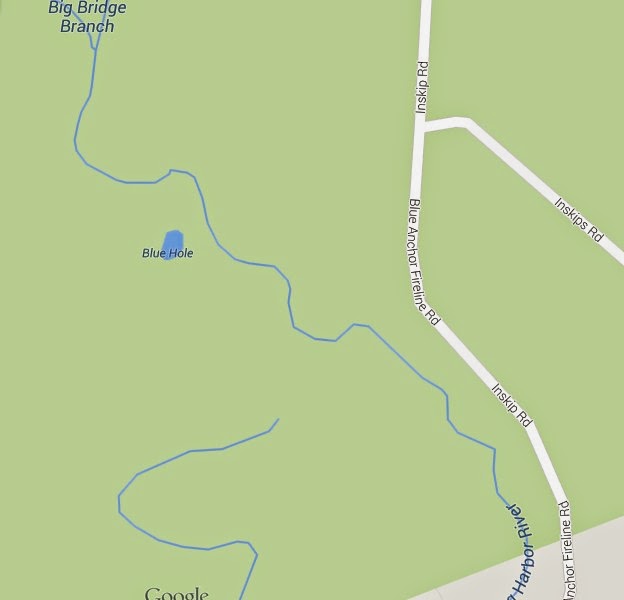 Some say that the hole is bottomless, others claim they have attempted to measure its depth only to fail. Legend states that The Devil Himself uses this hole as his personal portal to Hell. Still others claim that there is an unusual amount of Jersey Devil sightings in this area. 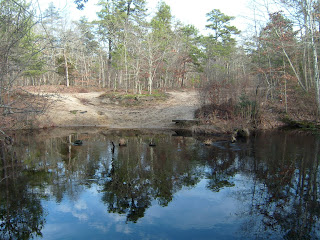 The Great Egg Harbor River where the bridge washed away

Locals fear swimming here and tell the tales of bodies being pulled out of the hole with scratches on their backs and legs after something pulled them down to their watery grave. Legends and tales are in no short supply and state that whirlpools form and swimmers cannot escape its pull. One man was supposedly pulled from his icy grave with scratches on his legs and black empty holes where his eyes once were. Of course tales of occult activity has also been attached to the location. 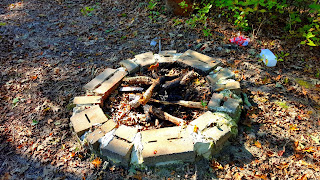 There are several fire pits around the area, but many claim them to be of Satanic origin 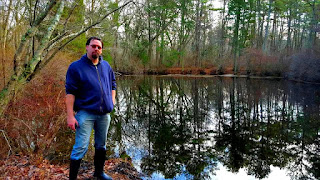 My personal opinion is that the Blue Hole is a pingo (http://en.wikipedia.org/wiki/Pingo), left over from the Ice Age. This would explain the cold water along with why the color is clear as opposed to the murky cedar water of surrounding bodies of water in the area. 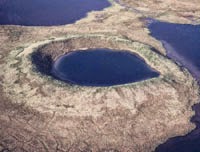 New Jersey is full of strange surprises and the Blue Hole is no exception.

(Chris Chaos is a long time resident of South Jersey who once again resides in and writes from Gloucester City, New Jersey.  He is a filmmaker, a business owner, writer, urban explorer and investigator of the odd and weird, has a black cat named Jynx, four rats: Phantom the Dumbo Rat, Abbey the Albino, Hopping Heather and Climbing Carol, a proud parent, happily taken and a connoisseur of hot wings. Chris can be reached at AxisVideo@aol.com)
Posted by Chris Chaos at 4:34 PM